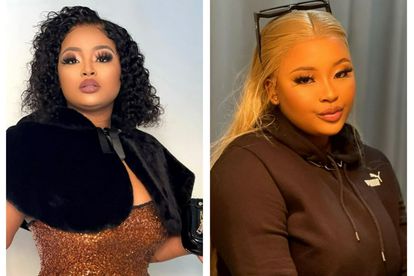 Cyan has come for all the people that dragged her for her BBL. Images via Instagram: @cyan.boujee24

Cyan has come for all the people that dragged her for her BBL. Images via Instagram: @cyan.boujee24

Cyan said she realised that the negative comments were from people with zero following and zero followers. She also said she does not understand how the women who were speaking on her BBL had the audacity to do that when they are suffering with their own body problems.

ALSO READ: BBL No 3? Cyan Boujee hits back at tweeps after THAT meal

Posting the first picture, the 21-year-old captioned it, “my number 1, baby girl looks three times my age with just a selfie pic – I don’t wanna get to the body”.

The rest of the pictures, she kept emphasising at the very things that the women had said on her stories.

When she realised that the commenters were now deleting their commenting and putting their Instagram profiles on private, Cyan said, “my loves let’s be fair and not go private and delete comments anker. Be bold”.

It however seems like tweeps are agreeing with the women that were trolling Cyan for her body.

“The doctor that gave cyan boujee that BLL or liposuction procedure needs to be investigated. She botched her and cyan clear suffers from body dysmorphia, a mental issue meaning she’s not mentally well enough to be making such risky decisions about her body. Irresponsible AF,” said @HonestlyUghhhhh.

@Emmanue15085661 said, “Cyan boujee had a nice body that need little bit of gym nothing more now she ruined that body she’ll regrets alot and now it’s look like people are body shaming while they’re telling her the truth”.

@niqita11 defended Cyan and said, ” They way url carrying on about “Cyan Boujee” new body as if url sponsored or paid for it, if she’s happy with the way she looks why is it ur business 🥴🙄 the poor girl doesn’t catch a break from these clout chasers man 🚮”.