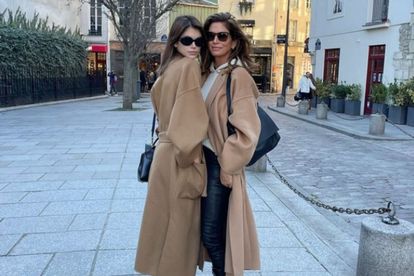 Crawford documented some of the pair’s excursions while in Paris in an Instagram album captioned: Postcards from Paris and fans are loving it.

In one photo, the look-alike pair can be seen wearing matching long tan coats, black shoes and black shades while strolling though the streets of Paris.

The album also includes images which seem to have been taken backstage at the Virgil Abloh show where Crawford and Gerber walked the runway. The models, showcasing the late Abloh’s line Off-White, shared the runway with, among others, Crawford’s fellow 1990s supermodel Naomi Campbell.

Meeting up with the supermodels and tennis stars…

But it wasn’t all work and no play. The supermodel also shared a glimpse of the city of love’s famous Haussmann architecture as seen from what appeared to be her hotel room. She also snapped a photograph of the Eifel Tower.

And of course, like most moms, Crawford couldn’t help but brag with her model daughter, Kaia. The supermodel also shares a “proud mom moment” as she included a photo of an outdoor Celine advert starring Kaia in the album.