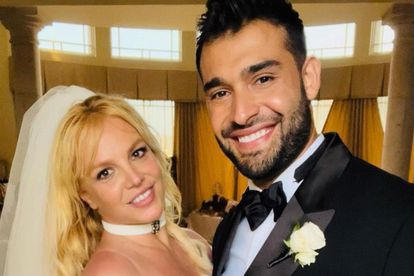 Britney Spears stunned in a custom Versace gown and 60-carat diamonds for her wedding on Thursday 9 June. Image via Twitter @CoutureIsBeyond

Britney Spears stunned in a custom Versace gown and 60-carat diamonds for her wedding on Thursday 9 June. Image via Twitter @CoutureIsBeyond

American pop star Britney Spears and her long-term partner, model and personal trainer Sam Asghari, tied the knot in an intimate ceremony on Thursday 9 June. The Womanizer hitmaker stunned in a custom wedding gown by Donatella Versace and according to US Magazine, Spears accessorised with more than 60 carats of diamonds which retail for $600 000 (R9.6 million).

As per People Magazine, the 40-year-old singer walked down the aisle to Elvis Presley’s classic hit, I Can’t Help Falling in Love.

A source told the publication that Spears started planning the wedding shortly after her engagement in November 2021.

“It’s a huge deal to her that she is finally able to get married. She wants it to be perfect,” they added.

Head of the Versace empire, Donatella Versace, was tasked with designing a wedding gown for Britney Spears. The pop star sipped into a black Versace mini dress then a red mini dress after the official wedding ceremony was concluded.

“We knew that Britney’s dress had a classic silhouette with an open neckline, so we designed timeless pieces that would compliment the style, including a tennis necklace, bracelet and statement drop earrings,” said Gottlieb.

“These three classic styles all worked seamlessly together, while standing out individually to create a special wedding-worthy look.”

BRITNEY AND SAM’S WEDDING IN PHOTOS