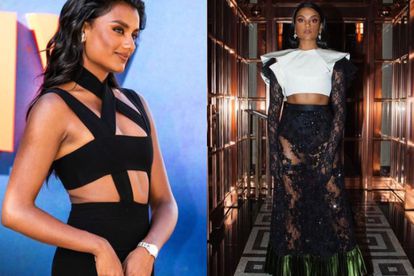 British actress Simone Ashley is best known for her role as Kate Sharma in Bridgerton season two. The actress has worn some bold and daring looks to the red carpet and events before.

Simone wore a dress designed by Norman Rene’ De Vera for the Fashion Awards in London, England in November 2021. The dress had a single long sleeve and a thin strap across her stomach that held the gown’s top and bottom together.

The skirt had a waist high slit and with a long train.

2. SIMONE IS PRETTY AND DARING IN PINK

The Bridgerton star showed that she is confident in risque fashion with her outfit for the EE British Academy Film Awards in March of this year. She wore a pink custom Valentino jumpsuit.

The bold outfit included a neon-pink loose fitting pants, a see-through top made from mesh and a cape like-back.

3. SIMONE IN A DARING GUCCI OUTFIT

Also in March this year, Simone wore a Gucci design to the Bridgerton season two premiere. The look included a see-through skirt made from black lace that had a floral design. The skirt also had a row of green velvet at its hem, and a silk waistband paired with a bold crop top.

The crop top had a ruffled neckline and sheer lace sleeves that extended into gloves.

4. ALL BLACK AT ‘THE GRAY MAN’ PREMIERE

Simone was daring once again for The Gray Man premiere where she wore a bondage-style design up top, with thick straps across her shoulders and chest. This was paired with a straight skirt which reached her ankles.

5. SIMONE GOES NAKED, BUT WITH LACE

The Sex Education star attended Paris Fashion Week in a white lace minidress and nothing but underwear that matched her skintone underneat. She paired the daring look with a sparkling jacket and strappy black heels.