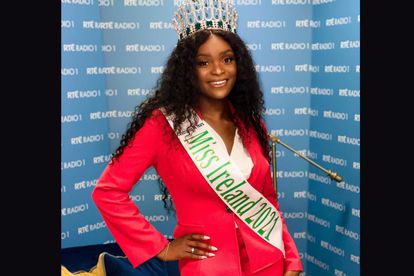 Pamela Uba is the first Black woman to be crowned Miss Ireland. Image via Instagram @pamela.ashley.uba.

Pamela Uba is the first Black woman to be crowned Miss Ireland. Image via Instagram @pamela.ashley.uba.

South African expat Pamela “Pam” Uba made history as the first Black woman to be crowned Miss Ireland on 5 September at the outdoor ceremony in Cavan, Ireland.

‘COLOUR IS NOT SOMETHING THAT HOLDS YOU BACK’

Pam Uba is a South African-born medical scientist who became the first black woman to be crowned Miss Ireland in a contest that has been running since 1947. The 26-year-old is also a part-time model who worked on the frontline during the pandemic.

The beauty queen said that she is grateful she can show women that colour is not something that holds you back.

“It means so much to me.I am so grateful I can show girls that colour is not something that holds you back and it doesn’t matter where you come from, the world is your oyster,” said Uba to The Irish Times.

Uba will represent Ireland at the 70th Miss World pageant in December this year which is set to take place at José Miguel Agrelot Coliseum in San Juan, Puerto Rico.

“I can’t even describe how excited I am to represent my country on such a huge platform. I can’t wait,” continued Uba.

Miss SA Shudufhadzo Musida will be representing South Africa at the pageant.

She said that she found it “strange” that she couldn’t hear gunshots when she arrived in Ireland.

“I remember thinking it was strange that I couldn’t hear a gunshot when I arrived. I cried when I got my Irish passport,” continued Uba.

“I cried when I got my Irish passport,” she added.

Pam Uba is the eldest of six siblings and grew up in the direct-provision and is a “very proud” Irish citizen. She initially resided in cities including Dublin before moving to the town of Ballyhaunis in County Mayo, where she lived for 10 years with her mom and siblings.

Although she is grateful for the direct-provision system she thinks there is a lot that can be improved on.

“People shouldn’t be made to stand still for years and years. I was in it for 10 years, not knowing what was happening or when my life could start. People need to be able to live their lives. I hope Ireland continues to help people, but the direct-provision system needs to be rethought and possibly removed,” she added.