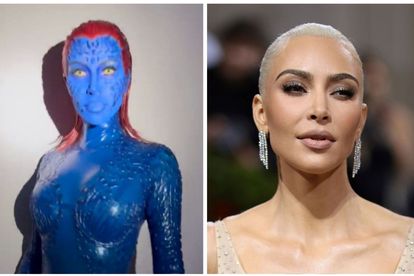 Kim Kardashian dished herself up as a Happy Halloween “treat” to her fans. The reality star and businesswoman morphed into Mystique from X-Men by squeezing her famous curves into a textured blue latex catsuit.

The 42-year-old KKW Beauty and SKIMS founder shared videos of her sleek Halloween transformation on Saturday on Twitter and Instagram. The Keeping Up With The Kardashians star perfected her fantastique Mystique look with matching blue face paint, yellow contact lenses, orange hair and stiletto heels.

Could Kim K be angling for a role in Marvel Studios’ upcoming X-Men reboot? Rebecca Romijn played Mystique in the X-Men film series from the early 2000s, with Jennifer Lawrence reprising the character of the elusive mutant in X-Men: First Class in 2011.

Kim Kardashian turns up at no-costume birthday bash as Mystique

The reality star’s transformation did turn heads at Black-ish star Tracee Ellis Ross’s 50th birthday party on Saturday…but for all the wrong reasons!

Independent reports that Kim clearly did not read her no-costume party invite as she arrived in full Mystique gear at the elegant affair.

Playing it cool, she did some damage control by posting a selfie of her and Ross on her Instagram Stories.

The SKIMS mogul wrote a tongue-in-the-cheek caption to accompany her post:

“That time I showed up to a birthday dinner in full costume when it wasn’t a costume party! Happy birthday to the most beautiful kind soul Tracee Ellis Ross.”

Keeping up with the Kardashians’ Halloween

The Kardashian clan has become known throughout the years for going all out when it comes to their Halloween dress-up game.

In 2018, all five of the Kardashian-Jenner sisters dressed up (or down for that matter!) as Victoria’s Secret models complete with individual sets of wings.

This year, Kylie wore a Bride of Frankenstein costume, and Kendall Jenner opted for Jessie from Toy Story…