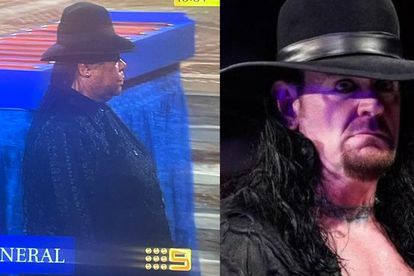 Dirco Minister Naledi Pandor. left, attended Queen Elizabeth II’s funeral alongside President Cyril Ramaphosa on Monday 19 September. Her hat choice had Mzansi in stitches with even an comparison to that of WWE wrestler ‘The Undertaker’. Images via Twitter @sauniverse___

Dirco Minister Naledi Pandor. left, attended Queen Elizabeth II’s funeral alongside President Cyril Ramaphosa on Monday 19 September. Her hat choice had Mzansi in stitches with even an comparison to that of WWE wrestler ‘The Undertaker’. Images via Twitter @sauniverse___

President Cyril Ramaphosa was one of the many world leaders who attended Queen Elizabeth II’s state funeral at Westminster Abbey, in London, on Monday 19 September. Minister of International Relations and Cooperation (Dirco) Naledi Pandor also represented South Africa at the historic event.

It was a sad day for the United Kingdom and the world as hundreds of dignitaries gathered to pay their final respects to Queen Elizabeth II. The Queen was laid to rest at the King George VI Memorial Chapel, on the grounds of Windsor Castle, following a private family service.

Pandor chose to wear a simple black dress, but it was her choice of headgear that stood out to many watching the funeral.

Posting a snap of Pandor at the funeral, Twitter user @MakPaulM wrote:

“She looks gangster… Naledi Pandor at the Queen’s funeral.

Twitter soon overflowed with jokes about the minister’s hat choice for the Queen’s funeral at Westminster Abbey. One tweep thought her hat was “so South African”.

“Naledi Pandor forgot to take a hat to the funeral. She borrowed one from Bheki Cele. (That’s my story and I’m sticking to it!),” wrote one tweep.

“Naledi Pandor’s hat is so South African,” wrote another tweep.

“Minister Naledi Pandor at Queen Elizabeth’s funeral. Apparently you all dubbed her ‘The Undertaker’,” commented yet another.

According to the United Kingdom government, approximately 250 000 people waited in line to see Queen Elizabeth’s coffin at Westminster Hall between Wednesday 14 September and Monday 19 September at 06:30.

“I don’t think anybody can suggest that our late monarch didn’t deserve that send-off, given the duty and the selfless service that she committed to over 70 years,” said the UK’s culture secretary Michelle Donelan.