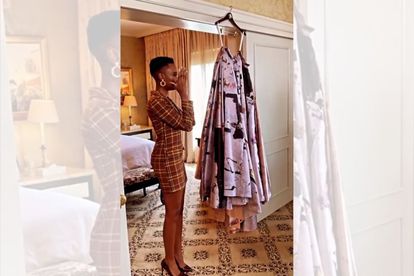 A dress to be worn by former Miss Universe at a soiree celebrating season two of Bridgerton, has attracted attention for all the wrong reasons.

This week, the beauty queen showed off her David Tlale creation which she will be wearing at a special Netflix event on Saturday, 26 March.

Season two of Bridgerton officially kicked off on Friday, 25 March.

Musa Khawula, a popular celebrity blogger revealed that he had started a petition for Zozi to dump her dress.

The natural-haired beauty will be hosting an elite event catered by Netflix alongside comedians Coconut Kelz and David Goliath. According to IOL, Zozi will take on the role of Her Majesty Queen Charlotte for an evening of drama, chaos, passion and secrets that will unfold.

However Musa does not think Zozi’s dress is fit for a queen – or a former Miss Universe.

Revealing his motivation behind the Change.org petition, Musa wrote: “Miss Zozi Tunzi is going to be wearing the ugly dress that will not complement any of her features.

“This dress by David Tlale is not flattering and he had no business giving it to the ever-gorgeous Miss Zozi Tunzi”.

Musa claims that the “curtain of a dress” – a floral silk Bridgerton-inspired number – “did not meet Zozi Tunzi’s brief or expectation”.

ALSO READ: ‘Bridgerton’: Everything you need to remember before season two

He continued: “Miss Zozi Tunzi’s reaction is clear that she is underwhelmed by this aunty dress made for her. [Her] reaction cannot be mistaken for someone who is excited hence this petition. [It] could be mistaken for a maternity dress”.

“If you care about our Miss Universe Zozi Tunzi image then the time for action is now. Sign and share this petition. I’m sure she would appreciate it”.

Whilst Musa’s petition seemed rather random, a number of Netizens agreed with his sentiments.

At the time of writing, the petition had received half the number of signatures it hoped to get.

“The dress is actually wearing her. I don’t think David Tlale was envisioning her in it. It’s a disaster”

“Her reaction kills me. Reminds me of when my parents bought me clothes for Christmas and I have to pretend to like them”