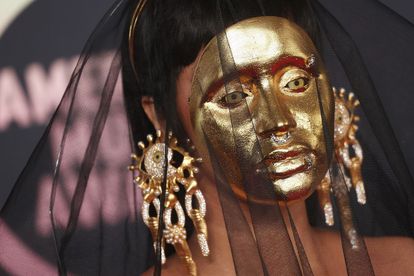 The hostess with the mostess donned several OTT haute-couture looks, that only she could pull off.

The mom of two – who became the second ever host of the AMAs after Queen Latifah – rocked an array of looks as she presented the annual music awards ceremony.

BEST DRESSED AT THE AMAs

The woman in the iron mask: The rapper donned a Schiaparelli gown and dramatic gold mask. The look was reminiscent of her Paris Fashion Week debut.

According to the designer, the bespoke gown was “inspired by scattered sands and pebbles” and made from “molded Abaca plant fabric.”

“This unique piece took five of us to solely work on it for months!”, the designer said of her creation.

Her namesake; dancer and entertainer Jojo Siwa donned a dress and pair of heels for the first time!

Daddy-daughter duo: Sorry MGK, your daughter Casie clearly stole the spotlight from you!

Barely there: The supermodel showed off her famous assets in a customised Zuhair Murad number.

And the biggest stars of the night were Korean boyband BTS who brought their charm and dazzling smiles to the red carpet, along with their dapper suits.