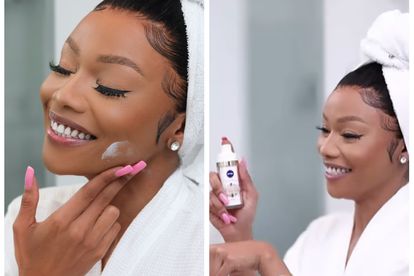 Bonang has courted controversy from tweeps after they accused her of wearing make-up in an advertisement promoting Nivea skincare products.
Image via Instagram
@bonang_m

Bonang has courted controversy from tweeps after they accused her of wearing make-up in an advertisement promoting Nivea skincare products.
Image via Instagram
@bonang_m

Bonang is securing the bag when it comes to business deals, of which her latest includes an endorsement of Nivea skincare products.

But whilst many tweeps can respect her ability to make money moves, her advertisement for the products is not getting the reaction she – or the brand- likely hoped for. That’s because Bonang’s ad for the skincare product features her wearing a full face of make-up!

And the move has many tweeps reminded of something the star’s ex-boyfriend AKA once said about her.

REVISITING WHAT AKA SAID ABOUT BONANG

Following their break-up in 2017, AKA took a seemingly shady shot at Bonang by calling her out on how she presents herself.

A few months after their split, the rapper was filmed doing a freestyle rap in a parking lot in front of fans. Without mentioning Bonang, he rapped: “Waited two years to see you with no weave on”.

Bonang – who dated AKA from 2015 to 2017 – is known for her glamorous weaves and fabulous face-beats.

In fact, the only-ever time we’ve ever seen her without her weave or make-up on was in a since-deleted video posted on her Instagram account. In the viral clip, Bonang was modelling a look for designers Quiteria & George ahead of her 2017 Durban July appearance. And the star proudly rocked her bare face and natural hair, winning the praise of her followers and fans.

TWEEPS GIVE NIVEA AD THE THUMBS DOWN

And keeping up with her A-lister appearance, Bonang appeared in full glam during her Nivea advertisement. In the video clip, the beautiful star is seen applying Nivea’s skin products on top of her face full of make-up – a move many tweeps claimed appeared bizarre and ironic.

@ChrisExcel102: “Now it makes sense what AKA said that she never saw Bonang without weave and make-up”

@Ke_Kamogelo: “Bonang will not go barefaced for anyone or any price”

@LORD_BLVCKNESS: “Heavy make-up, professional lighting, professional cameraman, photoshop and cream on top of all that? They literally didn’t even try to make this believable”

@Liviwe_finca: “This is why our black brands will never be able to change the narrative of black beauty if she will still apply make-up and advertise a cream that should be used without make-up”

Some tweeps even advised Bonang to learn a lesson from Natasha Thahane, who endorsed the Garnier range of skin products

One tweep shared: “Here’s Natasha we can see she’s not wearing makeup with Garnier [advertisement]. And there’s Bonang. We can see she’s applying the product on a full-face beat, that can’t be right. NIVEA is wrong. If anything Bonang could have just dressed up and posed next to the product but not applied”.