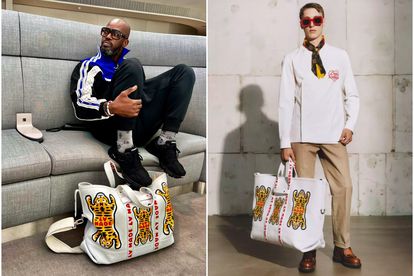 In fact, the price tag of his Virgil Ablox x Nigo toe bag by Louis Vuitton is giving his followers chest pains!

In a Twitter post, Black Coffee showed off a pic of Jim in a luxury lounge en route to his next destination.

“Cannes”, the SA DJ captioned the pic of his travel.

But it was Black Coffee’s signature drip that had tweeps green with envy.

According to a Google search, the limited edition Louis Vitton bag, a collaboration effort by the DJ’s bestie; the late Virgil Abloh, and Japanese designer Nigo, revealed a price tag of between R60 -R70 000.

Virgil – who died in November 2021 of a rare cancer – was the artistic director of Louis Vuitton’s menswear collection.

It’s not just Black Coffee who has a love for the finer things in life. Fellow muso Cassper Nyovest also showed off the fruits of his labour – a Gucci men’s crossbody bag, whose price stags start from a cool R20 000.

But Tamia Mpisane – the wife and baby mama of Royal AM chairperson Andile – topped the lot with her recent push present – a Louis Vuitton Capucine bag, valued at R80 000.