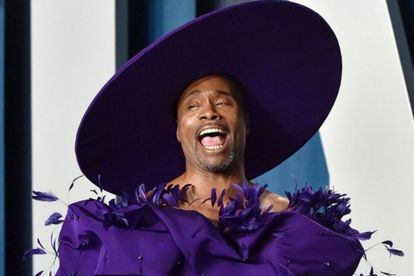 Billy Porter is widely known for his character Pray Tell on the Emmy-nominated hit series Pose. Porter’s rise to fame was a long one and although he made his Broadway debut in 1991, it was his Pose performance that stole the hearts of many.

The Emmy-winning actor criticised Harry Styles’ notable Vogue cover where the British musician stunned in a dress. Porter said he “changed the game” when it comes to men wearing skirts and dresses, and said all Styles had to do is be “white and straight” to land his Vogue cover.

ALSO READ: ‘I’m having a rebirth’: Billy Porter is processing his childhood trauma

Harry Styles was the first man to have a solo cover on American Vogue. The shoot was for the 2020 December issue and received mixed reviews from several people.

Conservative author and talk show host Candace Owens criticised the cover and said the feminization of men was “an outright attack.”

“Bring back manly men,” she wrote.

“I think he’s enjoying himself and he is free to do as he wishes. There’s been a lot more stuff going on this year than whether or not he’s you know, wearing the right clothes in someone else’s mind.”

Billy Porter has always turned heads with his unique outfits. In 2019 he stunned with a dress that flowed from a tuxedo into a dress at the Oscars.

Speaking to The Sunday Times, the Cinderella actor insisted he was the “first” to do it when it came to men wearing skirts and dresses. He also noted that he wasn’t dragging Harry Styles about the Vogue cover.

“I feel the fashion industry has accepted me because they have to. I’m not necessarily convinced and here is why. I created the conversation and yet Vogue still put Harry Styles, a straight white man in a dress on their cover for the first time.”

“I’m not dragging Harry Styles, but he is the only one you’re going to try and use to represent this new conversation? He doesn’t care, he’s just doing it because it’s the thing to do.”

“This is politics for me. This is my life. I had to fight my entire life to get to the place where I could wear a dress to the Oscars and not be gunned now. All he has to do is be white and straight.”

The 52-year-old actor is busier than ever as he prepares for his directorial debut. His memoir Unprotected, which dives into race, sexuality and art, was released on Tuesday 19 October. The multitalented star also recently signed with Republic Records in the United States and Island Records in the United Kingdom.

He released his first single under the labels titled Children, that was co-written by MNEK and Little Mix’s Jade Thirwell. Taking to Instagram he shared that Children was inspired by his life and everything he has gone through.

“For the first time, my music is what I want it to be, what I want it to say, which is hope, love. We have to choose it every day so we can fight the evil that is so pervasive. We can only fight it with love and I am so excited for my music for that.”