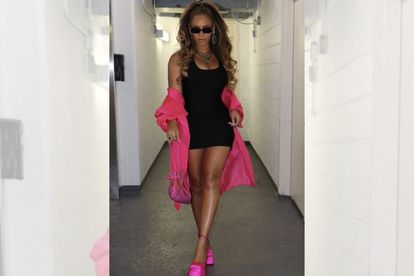 Days after making fashion history, Beyoncé is showing us flames again with another hot new look on social media.

The singing sensation made headlines last week after she was named a celebrity ambassador for luxury jewellery retailer Tiffany & Co and became the first ever black woman to wear their iconic piece, the Tiffany Yellow Diamond.

But it wasn’t all celebrations – Bey actually took an ‘L’ after she was called out for supporting colonialism and wearing a “blood diamond” over the piece that was discovered in Kimberley, South Africa in 1877.

It seems the dust has settled though, and this time, fans approve of Bey’s look!

The look was widely praised by fans, with many comparing her to a “black Barbie”.

Ahead of her milestone celebration, the mom of three opened up to Harper’s Bazaar about how she has evolved and matured over the years.

I’ve spent so many years trying to better myself and improve whatever I’ve done that I’m at a point where I no longer need to compete with myself.

“I have no interest in searching backwards. The past is the past. I feel many aspects of that younger, less evolved Beyoncé could never f*** with the woman I am today. Haaa!”