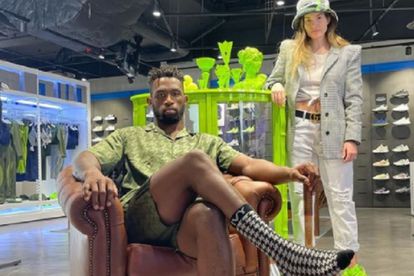 You know you’ve made it big when you receive an exclusive Ivy Park drop from the fashion queen herself; Beyoncé.

The singer and designer has officially unveiled her new collection for Adidas x Ivy Park called the Halls of Ivy.

Rachel and Siya Kolisi were two of the biggest stars to show their love for Beyoncé’s Ivy Park on their social media accounts.

The couple are ambassadors for athletic brand Adidas, and naturally score a truckload of freebies when it comes to new fashion collections.

And whilst Siya is an exceptional rugby player, he should seriously consider a stint in modelling if the below pics are anything to go by.

The Springbok captain showed his swag in an impromptu fashion shoot in an Adidas store.

Also showing us flames was designer Rich Mnisi who showed off his toned and chiselled physique.

The cast of Netflix’s Blood and Water also scored a feature in the funky fashion extravaganza.

And the only thing cooler than being seen in an limited edition Ivy Park collection is hanging out with another world famous star – Roger Federer.

Siya and the retired tennis ace were seen out and about in Switzerland. And of course our local boy took lots of snaps to show off the enviable moment