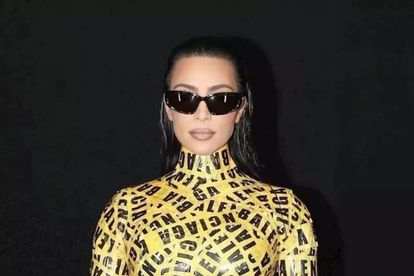 Reality TV star and businesswoman Kim Kardashian has been what one can call a “Balenciaga fashion statement” for the luxury French brand. From gliding onto the 2021 Met Gala red carpet wearing a black body suit with a train to attending the brand’s fall 2022 Paris Fashion Week show in a Balenciaga caution duct tape creation. And lest we forget, her Balenciaga Barbie faze of hot pink catsuits…

Following the massive outcry against Balenciaga’s Spring/Summer 2023 advertising campaign for plush bear bags, the 42-year-old Skims founder however is “re-evaluating” her ties with the brand.

Some of the photos showed young children holding handbags of teddy bears wearing black leather straps with silver studs. In one of the photos wine and beer glasses are also present.

Balenciaga has since withdrawn the BDSM-inspired ad campaign on 22 November and issued two apologies.

On Sunday 27 November, Kim tweeted that she first wanted the “opportunity to speak to the team” to understand how this could have happened. The star has been a celebrity ambassador for Balenciaga since February this year.

She continued by saying that “as a mother of four, I have been shaken by the disturbing images”.

“The safety of children must be held with the highest regard and any attempts to normalize child abuse of any kind should have no place in our society — period,” she wrote.

Kim then concluded her Twitter posts by saying that she is “currently re-evaluating my relationship with the brand”.

Following her “re-evaluating my relationship with the brand” response, Kardashian has been slammed online for being insincere in her “outrage”, according to The Mercury News.

Social media users are not fans of her rather lukewarm response though. In their eyes, the reality TV star should cut her lucrative deal with the fashion house entirely if she’s really concerned about the controversial campaign.

Hollywood actress Nicole Kidman, who is also one of Balenciaga’s celebrity brand ambassadors, is being called out for staying silent on the issue, while continuing to promote the luxury house on her social media.

The Oscar winner has kept mum, unlike Kim or Bella Hadid. The supermodel has not released a statement. Hadid however at least deleted an Instagram post in which she promoted fashion from the Balenciaga’s 2023 spring line last week, the Daily Mail reported.

According to Page Six, Kim’s ex-husband, rapper and designer Kanye West, seemingly called on fellow celebrities to denounce the luxury brand when he was stopped by paparazzi leaving church on Saturday 26 November.

“This just shows you all celebrities are controlled. You don’t see no celebrities talking about the Balenciaga situation,” West said, according to TMZ.

“All of these celebrities out here. Don’t let them influence you in any way, because they’re controlled by the people who really influence the world,” he added. “They’re not serving God.”

Balenciaga ended their partnership with West in October after he posted an anti-Semitic tweet and appeared at a Paris fashion show wearing a shirt with the slogan “White Lives Matter”.