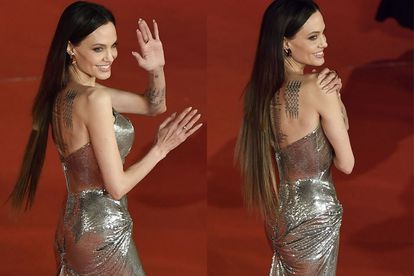 Mr & Mrs Smith star Angelina Jolie looked as gorgeous as always in a silver Versace gown on The Eternals red carpet at the 16th Rome Film Festival on Sunday 24 October. She opted for a smokey eye make-up look and platform heels to compliment the figure-hugging metallic dress.

However, it was her hair that caught the attention of fans who demanded to know “who did her dirty”. Her extensions appeared to have just been effortlessly clipped underneath her hair.

There is a visible difference between her natural hair and extensions which is usually carefully blended in by a professional hairstylist.

Take a look at the bad hair extension day…

ALSO READ: ‘Externals’ or The Weeknd? No kiss and tell from Angelina Jolie yet [watch]

TWEEPS: ‘WHO DID MS JOLIE THIS DIRTY WITH THOSE HAIR EXTENSIONS‘

Tweeps were quick to notice the hair extension issue and shifted the blame to her hairstylist.

“Who did ms Jolie this dirty with those hair extensions,” wrote @CoolCatVicky.

“Who put the extensions to my queen Angelina Jolie? They need to be fired,” wrote @jolietheeternal.

“How do you let Angelina Jolie walk a red carpet with her hair extensions looking like this, somebody (is) getting fired,” wrote @mishnewbooty.

“Have been thinking about Angelina Jolie’s hair extensions all day,” wrote @sam_van_dyk.

“Who did Angelina Jolie’s unblended hair extensions and was it the same person who fails to tone Kristen Stewart’s hair?” wrote @arabellesicardi.

ANGELINA JOLIE IN ‘THE ETERNALS’

The Eternals premieres on 5 November. The teaser of the film broke the “pandemic-record” and received 77 million views in its first day alone.

Angelina plays the role of Thena in the film which is directed by Oscar-winning filmmaker Chloe Zhao. The Maleficent star will don the character’s classic gold outfit with long blonde hair.