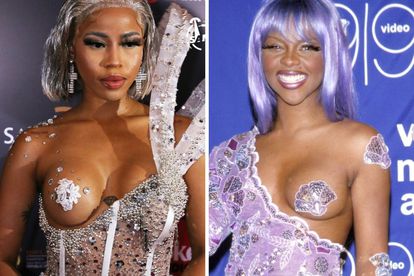 Anele Zondo showed off a look at the 2022 SAMAs reminiscent of Lil Kim’s VMA outfit in 1999.
Images via Twitter

Anele Zondo showed off a look at the 2022 SAMAs reminiscent of Lil Kim’s VMA outfit in 1999.
Images via Twitter

If there was one celebrity look that turned heads on the South African Music Awards (SAMAs) red carpet, it was Anele Zondo.

The actress and media personality landed on the best-dressed list in a look that had tongues wagging.

Taking to her Instagram, Anele Zondo revealed that her daring dress adorned with pearls and crystals was designed by Otsile Sefolo.

The asymmetrical gown featured a corset and over-the-shoulder prop, which looked like something out of the pages of Vogue magazine.

But it was the star flaunting her bare breast – covered in sequins – that had fans salivating.

The former Massive Music presenter added a pair of bling earrings and metallic sandals to complete the look. She also donned a platinum blonde as finishing touches.

When asked what inspired her dazzling appearance, Anele Zondo told reporters on the red carpet: “It’s just bringing back the winter season before my season. Which is the spring season, my birthday season, Libra season. We said it wasn’t cold enough, let’s make it colder and that is exactly what we did. We went icy, fully crystals, nothing more, nothing less.”

Anele’s outfit was reminiscent of a look worn US rapper Lil Kim at the 1999 MTV Video Music Awards.

With both music and fashion trending topics from the SAMA’s over the weekend, many viewers took to the platform to rate the look.

@Leonard22408623: “The spirit of Jezebel has infected too many women in Mzansi”

@ManChriz54: “Women will walk in the streets naked soon, we are slowly getting there. They are tired of wearing clothes”

@BoitumeloTimz: “ Eyelashes and hair let her down. Everything else is perfect”

@lumka_jwara: “She is always experimental in her looks but sometimes you can pull back. It’s all too much”

Yah neh ???? God tripped fell, got up dusted himself and made perfection ????????‍♂️ damn pic.twitter.com/PNm3vrO8xp

Women will walk in the streets naked soon, we are slowly getting there. They are tired of wearing clothes. pic.twitter.com/Ccxjonuifm