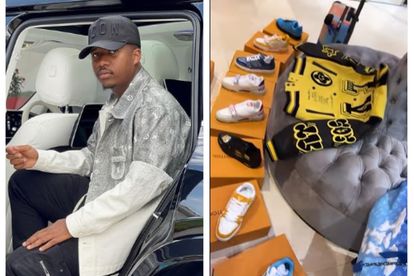 If there is one celebrity in Mzansi who is luxury brand conscious, it’s Andile Mpisane.

The Royal AM chairperson – the son of Shauwn “MaMkhize” Mkhize and Sbu Mpisane – has expensive taste when it comes to fashion, cars…and partying it up.

The up-and-coming rapper, who is signed to DefJam Africa, showed off his latest shopping spree which set him back at least R1 million.

In celebration of his new track, Makhwapheni, which drops on Friday 24 June, the label-loving star flaunted his latest Louis Vuitton luxury haul.

Taking to Instagram, Andile Mpisane teased his followers about his new track, Makhwapheni, which he set against a backdrop of Louis Vuitton merchandise.

Included in his shopping splurge, was:

WHAT IS HIS LATEST TRACK ABOUT?

Andile Mpisane’s release of Makhwapheni will be his first single released on DefJam Africa.

The publication reports: “As a newly wedded man, his song could mean he is faithful to his wife. He doesn’t want any external people outside his marriage to worm themselves in. His music is most likely to be a way of telling his wife that he is only hers”.

New US restrictions against Taliban for bans on women