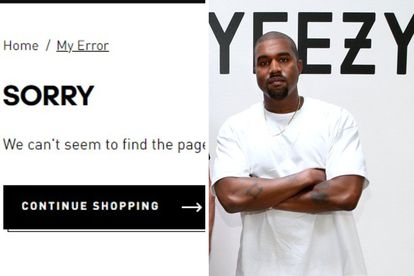 Yeezys have officially been pulled from shelves and online after Adidas ended its partnership with Kanye West.
Image via Adidas

Yeezys have officially been pulled from shelves and online after Adidas ended its partnership with Kanye West.
Image via Adidas

Following widespread backlash over his anti-Semitic comments, Adidas has officially severed ties with Kanye West aka “Ye” and their collaboration with Yeezy. And it appears South African stores have been instructed to withdraw stock with immediate effect.

The rapper has seemingly been “cancelled” by Hollywood after being dropped from his lucrative deal with the sportswear giant, and others including GAP and Balenciaga. He’s also been ditched by his celebrity agency and hotshot lawyers.

On Tuesday 25 October, Adidas issued a statement on their decision to terminate their partnership with Kanye West.

It said: “Adidas does not tolerate antisemitism and any other sort of hate speech. Ye’s recent comments and actions have been unacceptable, hateful, and dangerous. They violate the company’s values of diversity and inclusion, mutual respect and fairness”

Adidas added that it would: “end production of Yeezy branded products, and stop all payments to Ye and his companies. Adidas will stop the Adidas Yeezy business with immediate effect.”

And the brand quickly put its words into action, withdrawing stock online and in stores.

A quick search on the Adidas SA website yielded no results for Yeezy items.

However, according to CNN, Yeezy is the intellectual property of Adidas, meaning the brand could leave the door open to “rebrand the existing Yeezy designs sans Ye”.

Weeks after their popular Yeezy sale which saw South Africans come out in droves, the retailer revealed that they

It said in a statement to The South African: “Due to all the issues happening with Adidas and Kanye West at the moment they’ve asked us to remove the stock from the website and all stores”.

It’s unclear what will happen to all the local stock.