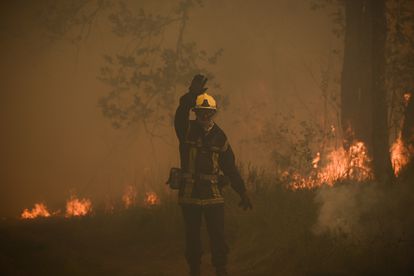 A firefighter waves to colleagues during an operation to try to control a forest fire near Louchats, some 35kms from Landiras in Gironde, southwestern France on 18 July, 2022. – The intense mobilisation of firefighters did not weaken to fix the fires in the south of France, and particularly in Gironde where flames ravaged more than 15.000 hectares of forests since it is started on 12 July, in a context of generalised heat wave in France. Photo: Philippe LOPEZ / POOL / AFP

A firefighter waves to colleagues during an operation to try to control a forest fire near Louchats, some 35kms from Landiras in Gironde, southwestern France on 18 July, 2022. – The intense mobilisation of firefighters did not weaken to fix the fires in the south of France, and particularly in Gironde where flames ravaged more than 15.000 hectares of forests since it is started on 12 July, in a context of generalised heat wave in France. Photo: Philippe LOPEZ / POOL / AFP

Hotter, longer, more frequent. Heatwaves such as the one currently roasting much of Europe, or the record-shattering hot spell endured by India and Pakistan in March, are an unmistakable sign of climate change, experts said Monday.

“Every heatwave that we are experiencing today has been made hotter and more frequent because of human induced climate change,”

“It’s pure physics, we know how greenhouse gas molecules behave, we know there are more in the atmosphere, the atmosphere is getting warmer and that means we are expecting to see more frequent heatwaves and hotter heatwaves.”

In recent years, advances in the discipline known as attribution science have allowed climatologists to calculate how much global heating contributes to individual extreme weather events.

The India-Pakistan heatwave, for example, was calculated to have been 30 times more likely with the more than 1.1 degrees Celsius of warming that human activity has caused since the mid-nineteenth century.

The heatwave that shattered records in North America in June 2021, leaving hundreds dead as temperatures soared to 50C in places, would have been virtually impossible without global heating.

And the last major European heatwave, in 2019, was made 3C hotter by climate change.

“The increase in the frequency, duration, and intensity of these events over recent decades is clearly linked to the observed warming of the planet and can be attributed to human activity,”

the World Meteorological Organisation said in a Monday statement.

However unbearable temperatures get this week, scientists are unanimous: there is worse to come.

At 1.5C of warming — the most ambitious Paris climate agreement goal — UN climate scientists calculate that heatwaves will be more than four times more likely than the pre-industrial baseline.

Despite three decades of UN-led negotiations, countries’ climate plans currently put Earth on course to warm a “catastrophic” 2.7C, according to the UN.

Matthieu Sorel, a climatologist at Meteo-France, said that climate change was already influencing the frequency and severity of heatwaves.

“We’re on the way to hotter and hotter summers, where 35C becomes the norm and 40C will be reached regularly,”

The heatwaves of the future depend largely on how rapidly the global economy can decarbonise.

The UN’s climate science panel has calculated that 14% of humanity will be hit with dangerous heat every five years on average with 1.5C of warming, compared with 37% at 2C.

“In all of places in the world where we have data there is an increase in mortality risk when we are exposed to high temperatures,”

said Eunice Lo, a climate scientist at the University of Bristol’s Cabot Institute for the Environment.

It’s not only the most vulnerable people who are at risk of health impacts frim heat, it’s even the fit and healthy people who will be at risk.”

There is a real risk in future of so-called “wet bulb” temperatures — where heat combines with humidity to create conditions where the human body cannot cool itself via perspiration — breaching lethal levels in many parts of the world.

As well as the imminent threat to human health, heatwaves compound drought and make larger areas vulnerable to wild fires, such as those now raging across parts of France, Portugal, Spain, Greece and Morocco.

They also menace the food supply.

India, the world’s second-largest wheat producer, chose to ban grain exports after the heatwave impacted harvests, worsening a shortage in some countries prompted by Russia’s invasion of key exporter Ukraine.