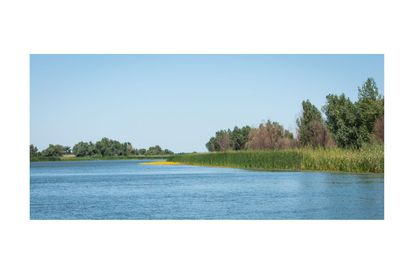 In the popular imagination, estuaries don’t have the prestige or the romanticism of their two constituent parts: the rivers that feed them with freshwater from one side, the ocean that injects salty water from the other.

But as the go-between between river and ocean, estuaries nonetheless deserve more credit. Their dull, brackish appearance belies the abundance of life that they hold. Considered as, pound for pound, among the most productive environments on earth, they are said to produce more organic matter than forests or grasslands of the same size. With little of the violent movements of water associated with oceans and rivers, they hold few predators. As a result, they shelter and offer respite to countless species of birds, fish and mammals.

They are economic powerhouses, too. They’ve been described as “super” ecosystems. And, in the case of South Africa, although they comprise less than 2% of the country’s territory, they’re estimated to contribute R4.2 billion per annum (around US$4.2 million) to the country’s economy.

A 2020 report pointed out that as many as 80 species caught in linefishery rely on South Africa’s nearly 300 estuaries for their feeding, refuge and reproduction.

In addition, estuaries are valued for their capacity as “blue carbon” sinks. This refers to the ability of coastal mangrove forests, salt marshes and seagrasses to store carbon dioxide and other greenhouse gases from the atmosphere, mitigating the effects of climate change.

However, estuaries are vastly understudied which means that we know little of the harm that we as humans are doing to them.

To help make up for this gap in our knowledge about the nearly 300 estuaries in South Africa, we have increasingly begun to look at microplastic pollution in a selection of these estuaries. Our work is in collaboration with colleagues from University of KwaZulu Natal.

Our findings in a recent study show that South African estuaries could be considered to be moderately to highly polluted in comparison with microplastic levels in countries such as Singapore, China and even the UK. We conclude that urgent action needs to be taken to reduce pollution of these precious waterways.

Much of the research on microplastic pollution focuses on oceans and beaches. This overlooks the location of estuaries, sitting at the interface between terrestrial and ocean environments. As such, they store both land- and sea-based macro and microplastics – which animals may consume – and transport large amounts of plastic and other debris from the rivers to the ocean.

Microplastics are defined as fragments of plastics less than 5mm in length, typically small pieces of plastic that remains as they break down into every smaller pieces. Plastics, of course, can take hundreds or even thousands of years to decompose, in the meantime posing threats of marine and human life.

Our study focused on four mangrove-dominated estuaries in KwaZulu-Natal. These were the St Lucia, uMgeni, Durban Harbour and Isipingo estuaries located on the country’s east coast. Healthy mangrove forests are considered important as effective protection of coastlines, and serve as nurseries for many fish species.

We took water and sediment samples over two random days in the dry season, and two random days in the wet season. This is critical as water levels and salinity – salt content – rise and fall depending on the tides and the seasons. In a good wet season, the rivers will flood the estuary with freshwater. Over the dry season, when input from rivers dry up, estuaries may shrink and become more saline. Likewise, stormy ocean weather would inject more saltwater into the estuaries.

As a result, microplastic pollution in the estuaries tend to rise and fall. Rivers, for example, pick up much human waste as they course past and through human settlements, onward to the ocean via estuaries. Microplastic levels have also been found to increase over the dry season, however, due to increased sedimentation.

Across the four estuaries, we found and identified seven types of microplastics. We categorised these as fibres, films, foamed plastics (foam), fragments, fishing line, microbeads, and pellets.

What we found was that microplastic abundance rise with increased levels of what we describe as “disturbance”. This is defined as either the ecological influx of new organisms or species into estuaries, or the human, anthropogenic kind, which includes the introduction of chemicals, heavy metals and other pollution as a result of human residential or industrial activity.

We found that microplastic concentrations were highest in water and mangrove sediment of those estuaries affected by industrial, residential and agricultural land uses (Isipingo). This was followed by the system impacted by residential recreational disturbances (uMgeni); and heavy industrial and maritime activities.

The average sediment concentrations in our study sites varied between 37MPs/kg in semi-rural estuaries and 287 MPs/kg in the most densely populated urban mangroves. In the UK’s River Tame, levels around 240 MPs/kg have been recorded in urban areas. In China, levels went as high as 3,520 MPs/kg in mangroves closer to industrial/urban zones.

South Africa is a developing nation that is cranking up industrial activity. At the same time its population is growing fast, “consuming” more plastic products – from 2010 to 2018, World Wildlife Fund South Africa estimated, total plastic consumption in South Africa grew by 24%. The country has limited consumer and environmental awareness, and multiple shortcomings in its waste management systems.

These issues should be addressed urgently. Consumers, rich and poor, can become more informed of what they buy, while industry should be encouraged or compelled to offer more sustainable alternatives. Pressure should also be put on industry to improve the treatment of their waste.