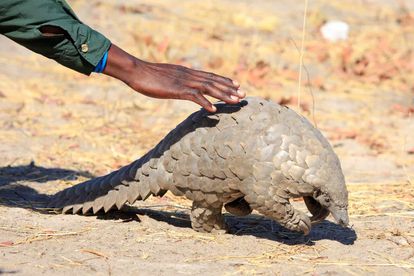 Pangolins are among the world’s most endangered animals. Image: Adobe Stock

Pangolins are among the world’s most endangered animals. Image: Adobe Stock

If nothing else, the COVID-19 pandemic has highlighted the plight of endangered animals like the curious-looking but harmless scaly pangolin, whose body parts are used in Chinese traditional medicine.

Many researchers believe the selling of pangolin scales in a Chinese market may have been one of the triggers of the virus.

Filmmakers’ fight to save pangolin

Two award-winning South African moviemakers with a passion for preserving endangered wildlife are now making sure that their plea to save this creature from extinction is broadcast far and wide, and as often as possible.

Eye of the Pangolin, created by Bruce Young (Blood Lions) and Johan Vermeulen (Kalahari Tails), sounds the alarm that time is running out for the reclusive pangolin, which resembles a miniature ant bear.

“We haven’t much time to save it. It’s the most poached animal on earth and used for everything from food to traditional medicine,” Young said. “It is poached more than rhino and yet not many people know about their plight.”

The moviemakers travelled the African continent to learn more about these strange, secretive creatures. The two-year mission involved research expeditions into rain forests and across vast sand dunes.

Pangolin film to be screened at New York event

Their film is the first-ever full length documentary about all four species of African pangolin, and their habitat and habits. It has been accepted by the Wildlife Conservation Film Festival committee to be screened in New York in 2021.

“We are thrilled that we have been able to get this far,” Young said.

“We believe that [placing] vulnerable creatures like this on the world stage increases their chances of survival.”

Other moves by China includes cracking down on poaching and trafficking, on the animals’ use in traditional medicine, as well as setting up a protection research centre and gene bank for pangolins.

South Africa has a number of small colonies of the Temminck’s ground pangolin, which the South African National Biodiversity Institute (Sanbi) describes as “a secretive, primarily nocturnal mammal that is covered in overlapping plate-like scales, which provides protection from predators.”

When under threat, Sanbi said, the Temminck’s ground pangolin rolls into a ball with its soft underbelly covered by a muscular tail. The word pangolin comes from the Malay word “pengguling”, meaning something that rolls up.

In their search for other species, Young and Vermeulen travelled to the Kalahari in South Africa in search of the Temminck’s ground pangolin, then to Ghana to find the white-bellied pangolin, and on to the Central African Republic which is home to the black-bellied pangolin.

Their last trip was to Gabon to try and capture on film the giant ground Pangolin – the most elusive, they say, of all of them.

“Pangolins are notoriously shy and elusive little animals and so it was an enormous challenge to get them on film,” Vermeulen said.

Eye of the Pangolin is supported by WildAid, the Marchig Animal Welfare Trust, Foundation Marchig, the Tanglewood Foundation, Biggestleaf Travel and Pangolin Photo Safaris. It is freely available as an open source film via numerous online platforms.

Watch the trailer for ‘Eye of the Pangolin’ here: