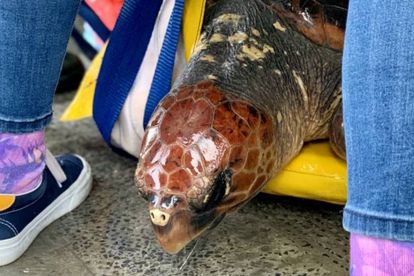 Most of the rescued turtles that arrive at the Two Oceans Aquarium are tiny loggerhead turtle hatchlings, weighing just a few grams. But, every now and then, an adult loggerhead is rescued and needs help too!

According to a statement from the Two Oceans Aquarium in Cape Town, a 50kg female loggerhead sea turtle was delivered to the team at the aquarium’s Educationation Foundation in late July.

She was reportedly found stranded near Gansbaai, entangled in a ghost fishing net.

“Sea turtles breathe air, so becoming entangled in abandoned fishing gear can easily result in them drowning,” the aquarium writes. “This turtle was very lucky that she washed up before that could happen.”

It eventually took four hours and 13 members of the public to get this turtle into safe hands.

She was later named Nobomvu, a reference to the unusual red tint of her shell which was caused by tiny microorganisms living on her carapace.

“Initial health checks indicated no immediately obvious injuries, but the stress of partial drowning, dehydration, and possibly drifting in the sun can have internal effects so Nobomvu will receive close care over the coming months to be sure she is 100% healthy before being released.”

Luckily, after spending her first few weeks of care in a small pool that was shallow enough for her to be able to rest without needing to float, she has been moved into one of the larger quarantine pools in order to get exercise and stay fit.

One of the most famous loggerhead turtles under the watchful eye of the Two Oceans Aquarium is probably Yoshi, the extraordinary loggerhead turtle that was released from the aquarium in 2017. Yoshi travelled from South Africa to the coastline of Western Australia – which ultimately became the longest-ever recorded journey of any tracked animal ever.