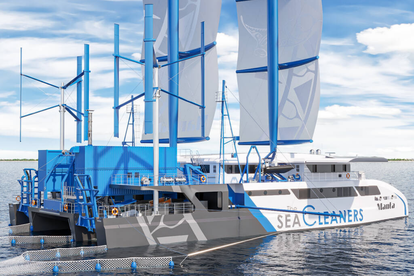 Manta by SeaCleaners is the first-of-its-kind processing ship designed to collect, treat and repurpose large numbers of plastic debris floating in polluted waters, along the coasts, in estuaries, and in the mouths of large rivers.

Relying primarily on renewable energy sources, the deep-sea vessel is eco-friendly and able to cross the oceans, intervening rapidly wherever it’s needed.

Poised for launch in 2024, the Manta will operate autonomously 75% of the time without the use of fossil fuels, and it will have the ability to extract between 5,000 and 10,000 tons of floating plastic each year.

WAR ON PLASTIC: HOW MANTA DOES THE JOB

Its design allows the Manta to extract microplastics from 10 mm upward and up to one metre deep. Depending on the density and closeness of the layers of waste, the catamaran can collect between 1 to 3 tons of waste each hour.

Even more impressive, its hybrid abilities means that this catamaran can operate for up to 24 hours a day, seven days a week.

Each boat is equipped with multiple collection systems, including a set of waste-collecting conveyor belts to bring the plastic from the ocean to the boat, three floatable systems to pick up surface waste, two smaller multipurpose collection rafts for shallower and narrower parts of the ocean that the larger catamaran can’t access, and two lateral cranes to pull larger pieces of debris from the water.

According to the designers, led by the company’s founder Yvan Bourgnon, the first mission of the Manta will take place in Southeast Asia. After that, the Manta will operate in Africa and South America but will also intervene in temporarily polluted areas following climatic or natural disasters.

The project is three years in the making and will mark the world’s only work boat capable of managing 100% of the plastic waste it collects.

GREEN MACHINE: FROM PLASTIC TO ENERGY

An onboard factory will help sort and treat the collected waste, while an energy conversion unit will convert the plastic into energy with a minimal environmental footprint. A combination of wind turbines, hydro generators and photovoltaic solar panels will produce renewable energy onboard.

To operate the sorting facilities, the Manta will accommodate 22 crew members and 12 passengers, including several scientists and researchers.

After three weeks at sea, the plan is to direct the boat toward coastal ports in the area to raise awareness, educate and welcome the public onboard for activities or events regarding plastic pollution.

As a result, the Manta will provide solutions to global plastic pollution and also act as an ambassador for the restoration of marine ecosystems and innovative plastic-collecting technology.