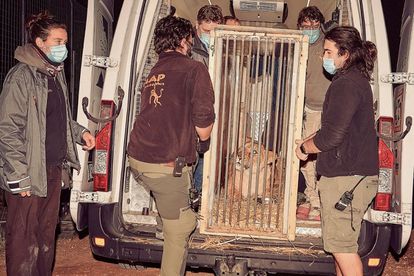 Six lions rescued from war-torn Ukraine have been sent to shelters in Spain and Belgium. Image via Twitter @AAP_Advocacy

Six lions rescued from war-torn Ukraine have been sent to shelters in Spain and Belgium. Image via Twitter @AAP_Advocacy

Six lions evacuated from war-torn Ukraine, including one rescued from a nightclub, have arrived at two animal shelters in Spain and Belgium, the shelters said on Thursday.

The lions, along with six tigers, two wild cats and a wild dog, arrived last week at a zoo in Poland by truck from a refuge near Kyiv following a two-day odyssey skirting battle frontlines.

Four of the lions and the wild dog were taken in on Wednesday by a rescue centre in Alicante in eastern Spain run by Dutch animal welfare charity AAP, the group said in a statement.

The lions had been living at a shelter near Kyiv after being rescued from “dire” circumstances, with one called Gyz kept in a “small cage in a shopping centre”.

Another lion called Flori was kept as a pet in a small apartment where it was fed cat food while another named Nila was rescued from a nightclub where it was kept to “entertain customers”.

“It will be a challenge to improve their fragile health, step by step, through an adequate diet, exercise and rest,” the statement added.

Two other lions named Tsar and Jamil were taken in on Wednesday by the Natuurhulpcentrum shelter in the province of Limburg in eastern Belgium, the group said on Facebook.

The animals will remain in quarantine for three months, it added. The remaining animals – the six tigers and two wild cats – have so far remained at the zoo in Poznan in western Poland.

The truck which drove nearly 1 000 kilometres to the Polish border came face to face with Russian tanks at one point, and had to avoid the Zhytomyr region, which the invading Russian forces have bombarded, a zoo spokesman said.

At the border, the animals were transferred to a Polish truck while the Ukrainian driver returned home to his children.