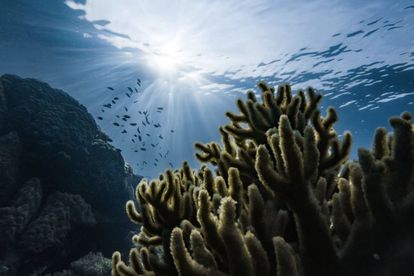 The Global Library of Underwater Biological Sounds (GLUBS) aims to collect mystery sounds from underwater and make it available to the public. Image via Unsplash.

The Global Library of Underwater Biological Sounds (GLUBS) aims to collect mystery sounds from underwater and make it available to the public. Image via Unsplash.

When marine researchers started recording sounds in the seagrass meadows of the Mediterranean Sea they picked up a mysterious sound, like the croak of a frog, that resounded within the dense foliage – and nowhere else.

“We recorded over 30 seagrasses and it was always there and no one knew the species that was producing this kwa! kwa! kwa!” said Lucia Di Iorio, a researcher in ecoacoustics at France’s CEFREM.

“It took us three years to find out the species that was producing that sound.”

The melodious songs of whales might be familiar music of the world’s underwater habitats but few people will have heard the hoarse growl of a streaked gurnard or the rhythmical drumbeat of a red piranha.

Scientists are now calling for those sounds and many thousands more to become more widely accessible.

They say a global database of the booms, whistles and chatter of the sea will help to monitor diversity in aquatic life – and help put a name to mystery sounds like the one Di Iorio and her colleagues investigated.

Experts from nine countries are working to create what they have dubbed the Global Library of Underwater Biological Sounds – or “GLUBS”.

This would gather together recordings held all over the world and open them up to artificial intelligence learning and mobile phone apps used by citizen scientists.

While experts have been listening to life underwater for decades, the team behind GLUBS say that audio collections tend to be narrowly focused on a specific species or geographical area.

Their initiative is part of burgeoning work on marine “soundscapes” – collecting all the sounds in a particular area to discern information about species types, behaviour and overall biological diversity.

Scientists say these soundscapes are a non-invasive way to “spy on” life underwater.

In a paper published recently in the journal Frontiers in Ecology and Evolution, the GLUBS team said many fish and aquatic invertebrates are mainly nocturnal or hard to find, so acoustic monitoring could help conservation efforts.

“With biodiversity in decline worldwide and humans relentlessly altering underwater soundscapes, there is a need to document, quantify and understand the sources of underwater animal sounds before they potentially disappear,” said lead author Miles Parsons of the Australian Institute of Marine Science.

GLUBS SCIENTISTS CAN RECOGNISE FAMILIES OF FISH WITH SOUND

Scientists believe that all 126 marine mammal species emit sounds, as do at least 100 aquatic invertebrates and some 1 000 fish species.

The sounds can convey a wide range of messages – acting as a defence mechanism, to warn others of danger, as part of mating and reproduction – or just be the passive noise of an animal munching a meal.

Di Iorio, a co-author on the GLUBS paper, said while marine mammals, like humans, learn their language of communication, the sounds made by invertebrates and fish are “just their anatomy”.

Many fish produce a distinctive drumming sound using a muscle that contracts around their swim bladder.

“This dum-dum-dum-dum-dum, the frequency, the rhythm and the number of pulses vary from one species to another. It’s very specific,” Di Iorio told AFP.

Scientists can recognise families of fish just from these sounds, so with a global library, they might be able to compare, for example, the thrumming calls of different grouper fish in the Mediterranean to those off the coast of Florida.

But another key use for the library, they say, could be to help identify the many unknown sounds in the world’s seas and freshwater habitats.

After many months investigating the strange seagrass croaker, Di Iorio and her colleagues were able to point the finger of suspicion at the scorpionfish.

But they struggled to explain how it was making such an unusual noise – and it refused to perform for them.

They tried catching the fish and recording it in a carrier. They sunk sound equipment onto the seabed next to the fish. They even listened in to aquariums that contained scorpionfish.

Eventually, colleagues from Belgium took a camera that could record at low light and staked out some seagrass in Corsica.

They were able to capture the kwa! kwa! sound as well as video of the fish making a shimmying motion. Back in the lab, they dissected a scorpionfish and found that they have tendons strung along their bodies.

Their hypothesis is that the fish contracts these muscles to produce the sound.

But there are many more mysteries where that came from. Di Iorio said in the Mediterranean, up to 90% of noises in a given recording might be unknown.

“Every time we put a hydrophone in the water we’re discovering new sounds,” she added.