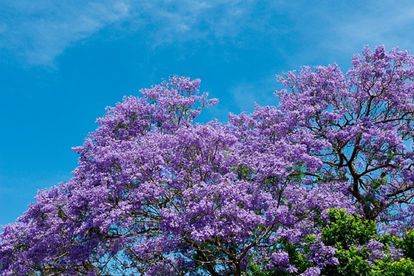 In a recent article for The Conversation, associate professor of Physical Geography at the University of the Witwatersrand, Jennifer Fitchett wrote about why jacarandas flowering earlier than usual in part of South Africa is actually a warning sign.

People living in Pretoria and Johannesburg are used to jacarandas and their purple flowers decorating the streets in late spring each year.

It’s said that about 16% of the land in the Gauteng city-region is planted with trees, forming one of the world’s largest and most densely vegetated man-made urban forests. Jacarandas were introduced to Pretoria and later Johannesburg in the early 1800s, specifically as ornamentals to line the streets of the suburbs and central business districts.

Jennifer writes that octogenarian residents who have lived in Gauteng their whole life might remember that jacarandas did not always flower in September. In the 1920s and 1930s, the trees only started to bloom in mid-November. Gradually over the decades, the date of bloom has advanced through October to the early weeks of September. This is referred to as a phenological shift and is being observed across a range of species globally as a result of climate change.

That’s why Jennifer and her team explored this change in the timing of jacaranda blossom in their paper published in the Journal of Urban Forestry and Urban Greening. Phenological shifts are species and location-specific – in some areas, and for some species, events are even being delayed as a result of specific climate drivers. There is very little phenological data for South Africa, and so very little phenological research has been conducted compared to the work in countries across Europe, Asia and North America.

Because jacaranda blossoms result in such a dramatic change in the urban landscape each year, they are often reported on in the news and, more recently, in social media posts.

“We mined these sources to compile a list of flowering dates of jacaranda trees spanning 1927 to 2019,” Jennifer writes. “This record allowed us the chance to contribute to the global attempts at recording phenological shifts. The records confirmed the advance in flowering dates, and from these, we quantified a mean rate of advance of 2.1 days per decade.

They concluded that if plants flower too early in the year, they are at risk of frost damage during the late winter months, and often do not complete their dormancy. Therefore, although phenological shifts represent an adaptation in plants and animals, these advances in flowering dates cannot continue indefinitely. At a critical threshold, the flowering season will become unsuccessful.

The strongest climatic driver of the phenological advance of jacaranda blossoms in the Gauteng city-region was found to be daily maximum temperatures during the month of June – falling within the dormant period of the tree. This is not uncommon, as the dormant period is critical for resource management in the tree. It does mean that by the time the spring months of September and October come around, day to day temperature and rainfall will have less impact on when the trees flower. Over the period 1918 to 2019, June mean maximum daily temperatures have increased by 0.2°C a decade, while the mean minimum daily temperatures have increased by 0.2 to 0.5°C a decade.

Jacarandas occupy a peculiar position in South Africa: they are well-loved and noticeable trees but they are invasive aliens. Due to their status as invasive species, replanting of jacarandas is currently prohibited, although the species has certain urban areas in which restrictions are less strict. This means the population of trees is ageing. The trees can live for over 100 years, but for some of the original trees, their centenary has already passed.

Phenological shifts represent an adaptation strategy for the plant – they cannot move on their own to a cooler climate that more closely matches what they are traditionally accustomed to, and so they alter their annually recurrent biological events. This cannot happen indefinitely, and as temperatures continue to increase, a more general risk of heat stress to the tree is heightened. This could mean that the years of purple spring seasons in Gauteng are limited.

“The results of this study do provide a warning for the urban forest, and an urgent call for future research. Collating data from a range of sources, including traditional and social media, can contribute to better understanding and modelling these changes.”