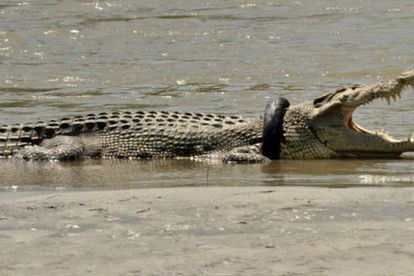 A crocodile in Indonesia is finally freed from a tyre that’s been stuck around its neck for more than five years. Image via Twitter @VanguardNewsUg

A crocodile in Indonesia is finally freed from a tyre that’s been stuck around its neck for more than five years. Image via Twitter @VanguardNewsUg

A wild crocodile in Indonesia who was trapped in a tyre for more than five years has been rescued, freed from its rubber vice and released back into the wild, officials and residents said on Tuesday.

Conservation workers have been trying to lure the stricken saltwater crocodile from a river since 2016 after residents of Palu city on Sulawesi island spotted the animal with a motorbike tyre wrapped around its neck.

But it was a local resident who snared the 5.2-metre long reptile – who was regularly seen sunbathing in the Palu river in Central Sulawesi – from its tight squeeze late on Monday.

Tili, a 34-year-old bird-seller, used chicken as bait and ropes to catch the beast at the end of what he said was a three-week rescue effort, before dozens of locals helped to drag the crocodile to shore and cut the tyre around its neck.

“I just wanted to help, I hate seeing animals trapped and suffering,” Tili, who like many Indonesians uses only one name, told AFP.

His first two attempts to rescue the croc failed because the ropes were not strong enough to contend with its weight, he said, before turning to nylon ropes used for tugging boats.

“I was already exhausted so I let them finish the rescue, the crocodile was unbelievably heavy, everybody was sweating and getting very tired.”

The crocodile was released back into the water immediately after the rescue to relieved cheers from locals.

Conservationists believe someone may have deliberately placed the tyre around the croc’s neck in a failed attempt to trap it as a pet in the archipelago nation that is home to several species of the animal.

Tili beat the authorities to the capture because they lacked the proper equipment for a rescue in the river that houses more than 30 other crocodiles.

“Yesterday was a historical day for us, we are grateful the crocodile was finally rescued and we appreciate the locals who showed concern for the wildlife,” Hasmuni Hasmar, head of the local conservation agency, told AFP.

The reptile made headlines in early 2020 when the local government promised a reward to anyone who caught the croc and removed the tyre, but later called off the contest over fears it could endanger its safety.

But the local conservation agency said Tili is in line for a prize after his daring plan paid off.

“We will award Tili for his effort in rescuing the wildlife,” Hasmar said.

Bored? Why not go ghost hunting? Here are the top 10 haunted places in SA