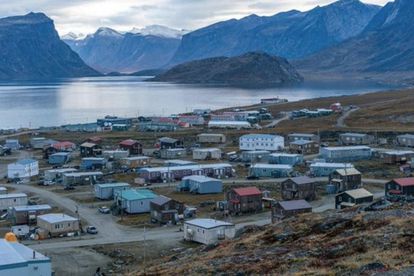 Climate change comes with a lot of grief and trauma and the Inuit community knows a lot about ecological grief. Image via Twitter @danielessienz.

Climate change comes with a lot of grief and trauma and the Inuit community knows a lot about ecological grief. Image via Twitter @danielessienz.

Marilyn Baikie’s remote Inuit community has more wisdom than they could ever want about ecological grief.

ALSO READ: Non-recycled plastic and old flip flops given a makeover in Kenya

These “people of the sea ice” have endured years of dramatic warming that is ravaging their beloved landscape at the edge of the Arctic, forcing them to reimagine a way of life that goes back centuries.

“It affects how you live your life, it affects the things you do with your children, it really is affecting people’s mental health,” said Baikie, a community health worker in Rigolet, a coastal village of 300 people in Canada’s Labrador region.

Before this region became one of the fastest-warming places on the planet, people could travel across frozen waters until spring, to fish or go deep into the countryside that is a profound part of their identity.

Now they often worry the ice won’t hold. So when in winter the thermometer goes up to zero – or higher – Baikie knows people will need extra support.

She and colleagues organise activities to ease stress and fill the “empty time” for people stranded by the warmth, like craft workshops and knowledge sharing between elders and young people.

Other local projects include mapping safe routes over the ice and taking an active part in climate monitoring. Still, people feel isolated, Baikie told AFP in a recent video call.

“When you talk about it, it really tugs at your heart.”

THE MENTAL HEALTH TOLL THAT COMES WITH CLIMATE CHANGE

But it was talking about it that made the Inuit elders – including Baikie’s mother – among the first to sound the alarm about the wrenching grief wrought by climate change.

Opening up to researchers more than a decade ago, they described the land like a family member.

“People would say it’s just as much a part of your life as breathing,” said Ashlee Cunsolo, who was studying climate impacts on water quality before pivoting to wellbeing as a result of the strong testimonies.

A decade later, these experiences and coping strategies are part of a growing understanding of the mental health toll of environmental destruction.

“It’s not just something anymore that people say: ‘that’s in the future, or that’ll be in 20 years, or that’s only in the north’,” she said.

THE TRAUMA THAT COMES WITH RAPID CLIMATE CHANGE

Cunsolo is one of the authors of a major UN report on climate impacts due to be released on Monday.

It is expected to underscore the severe global health implications – physical and mental – of warming and the need to adapt to the challenges ahead.

But unlike the spread of disease by growing numbers of ticks or mosquitoes, Cunsolo said the effects on people’s minds are myriad and overlapping.

Cunsolo calls this ecological grief, one of a range of new terms for environmental emotions that also includes solastalgia – “the homesickness that you have when you’re still at home”.

Canada alone has seen a catalogue of disasters in recent years, including floods, wildfires and what used to be a once-in-a-thousand-year heatwave.

“How do we support more and more people who are coping with this type of trauma? They’re not isolated events anymore,” said Cunsolo.

There is growing concern about climate anxiety in children and young people worldwide.

One survey of 10 000 16 to 25-year-olds in 10 countries, published in the journal The Lancet Planetary Health in December, found almost 60 percent were very worried about climate change.

In the Philippines that rose to 84%.

Manila-based researcher and psychologist John Jamir Benzon Aruta, who was not involved in the survey, said concerns are highest among young people with access to the internet and social media.

“They worry about how much stronger the typhoons will become, whether it’s a safe place for them and their future children,” said Aruta.

His research includes support for environmental defenders, in a country with one of the world’s highest rates of murders of these campaigners.

Climate anxiety can be seen as a “normal response to the actual threat”, he said, calling for therapies and responses that counteract feelings of helplessness.

People around the world are faced with a barrage of negative news and a popular culture saturated with dystopian visions of the future.

What they need, experts say, is hope.

“There is a need to maintain a sense of meaningfulness in life and that’s really the core of my interpretation and emphasis of hope,” said Finnish researcher Panu Pihkala, an ordained minister in the Evangelical Lutheran Church.

Pihkala, who stopped presiding over weddings and funerals in 2010, says his religious background has helped him contemplate these “deep existential issues” and host ecological grief workshops in Finland.

Even the creator of the term solastalgia, Glenn Albrecht, is looking to shift the focus away from the grief-laden term he created in 2003 as a response to the environmental destruction of coal mining in Australia.

His ever-expanding lexicon of “earth emotions” and concepts includes the hope that humanity will soon commence the “symbiocene” – living in harmony with the planet rather than destroying it.

“We needed to reinvent the way we talk about our present and our future,” he said in a recent online lecture.

In Labrador, Baikie said recognition of the emotional impact of climate change had not just given people an outlet for their feelings but enabled research they hope will help others around the world.

She wants people and governments to shake off the idea that climate catastrophe is “inevitable”.

“Every little bit counts and (if people) really devote money and attention to it, I think we could start seeing some changes,” she said.

“The time has come to stop talking about it and to actually do something.”