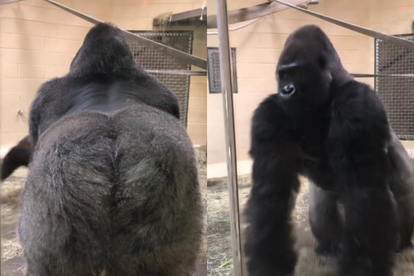 This cheeky gorilla named Cenzoo is quite mischievous. Images via TikTok @itsjustme0125

This cheeky gorilla named Cenzoo is quite mischievous. Images via TikTok @itsjustme0125

A cheeky gorilla has gone viral on social media after pulling a hilarious trick on a zoo visitor. In a TikTok video that has amassed hundreds of thousands of views, the big animal can be seen scaring the living daylights on the unsuspecting zoo guest. Hilariously, his tricks don’t end there.

Social media users just loved to watch him have fun with the zoo visitor and laughed heartily over his trick in the comment section.

In the video which was shared on the app by the guest, Tina Flick, gorillas can be seen casually going about their lives in their enclosure.

Everything seems calm and chilled until one of the gorillas creeps away from the rest and jumps at the window – instantly startling Flick and the other zoo guests who were standing by the window.

“That scared the heck out of me,” Flick exclaims in the background while laughing nervously.

Not stopping there with the shenanigans, the 26-year-of gorilla, whose name is Cenzoo, then turns around and moons the amused crowd with his hairy behind.

Netizens are loving it

The clip amassed thousands of likes and comments from TikTokers who couldn’t help but crack a smile after watching Cenzoo the gorilla in action.

Many of them made some pretty funny comments about what they think was a well-rehearsed stunt, reports The New York Post.

“And THAT’S how to make an entrance,” exclaimed one awestruck viewer, while another wrote, “WHY’D HE BACK IT UP ON YOU IM CRYINGGG.”

“He’s smiling too, he’s done this before,” speculated one armchair gorilla expert.

Others said at his moves are pretty smooth while joking that he was doing the ape version of pop star Michael Jackson’s moonwalk.