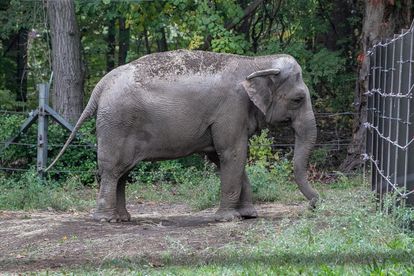 Happy the elephant at the Bronx Zoo. Some said she deserved some of the same rights as humans and should be freed. But New York court denies. Photo: TWITTER / Mike Izzo

Happy the elephant at the Bronx Zoo. Some said she deserved some of the same rights as humans and should be freed. But New York court denies. Photo: TWITTER / Mike Izzo

As intelligent as she is, Happy the elephant doesn’t meet the definition of a “person” and is therefore not being illegally confined in the Bronx Zoo, New York’s top court ruled Tuesday in a closely watched case for animal rights.

The state’s Court of Appeals 5-2 verdict against the habeas corpus proceeding filed by the Nonhuman Rights Project (NRP) means Happy will remain in her one-acre lot, where she has lived for 45 years, rather than moving to a much larger sanctuary.

NRP had contended Asian elephant, who was born in the wild in 1971, is an “extraordinarily cognitively complex and autonomous nonhuman” who should be “recognized as a legal person with the right to bodily liberty protected by the common law.”

It was the latest legal defeat for the organization, which has previously made similar petitions on behalf of other elephants as well as chimpanzees throughout the United States.

“no one disputes that elephants are intelligent beings deserving of proper care and compassion.”

But she affirmed the decisions of lower courts that previously heard the case, writing: “Because the writ of habeas corpus is intended to protect the liberty right of human beings to be free of unlawful confinement, it has no applicability to Happy, a nonhuman animal who is not a ‘person’ subjected to illegal detention.”

“Granting legal personhood to a nonhuman animal in such a manner would have significant implications for the interactions of humans and animals in all facets of life, including risking the disruption of property rights, the agricultural industry (among others), and medical research efforts,”

If such relief were granted to elephants, “What of dolphins — or dogs? What about cows or pigs or chickens –species routinely confined in conditions far more restrictive than the elephant enclosure at the Bronx Zoo?”

Reacting to the news, NRP praised the two dissenting judges, and said their views, as well as the fact that the case was heard in New York’s highest court, represented hope for the cause in the future.

“When the majority answers, ‘No, animals cannot have rights,’ I worry for that animal, but I worry even more greatly about how that answer denies and denigrates the human capacity for understanding, empathy and compassion.”

WHAT ABOUT ‘OTA BENGA’?

Wilson recalled the case of Ota Benga, a member of the Mbuti pygmy people who was kidnapped from Africa and placed on exhibit at the Bronx Zoo in 1906, attracting a quarter of a million visitors.

Wilson said that while Benga was a human being and Happy was not, “The crucial point from both Mr Benga’s and Happy’s confinement… is that both suffered greatly from confinement that, though not in violation of any statutory law, produced little or no social benefit.”

that was “an odious comparison with concerning implications,” adding, “We are unpersuaded.”

She concluded with the observation that enormous interest generated by the case was “a testament to the complicated and ever-evolving relationship between human beings and other animals,” but stressed that ongoing debate should be settled by legislation, not the courts.