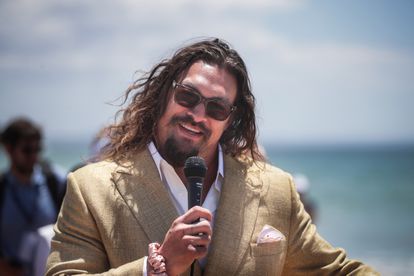 US actor Jason Momoa delivers a speech during the Youth and Innovation Forum at Carcavelos beach in Oeiras, outskirts of Lisbon on 26 June, 2022. Photo: CARLOS COSTA / AFP

US actor Jason Momoa delivers a speech during the Youth and Innovation Forum at Carcavelos beach in Oeiras, outskirts of Lisbon on 26 June, 2022. Photo: CARLOS COSTA / AFP

The star of the hit Aquaman film on Sunday called for the world’s oceans to be protected, on the eve of a long-delayed UN conference on the issue.

“The ocean needs us,””Without a healthy ocean life, our planet as we know it would not exist.”

“We must seek to right the wrongs we have done against our children and grandchildren, turn the tide on our irresponsible stewardship and build a moment for a future where humanity can once again live in harmony with nature.”

AQUAMAN STAR says ‘Save the oceans’

Hawaiian-born Momoa, who portrays Aquaman in the DC Extended Universe movies, was speaking at a youth gathering outside the Portuguese capital Lisbon.

They were joined at the Carcavelos beach by Portugal’s President Marcelo Rebelo de Sousa and the UN Secretary General Antonio Guterres, who is Portuguese.

Guterres said the world was “moving too slowly” to rehabilitate the oceans. “It’s time for the behaviours to be seriously condemned,” he added.

Guterres is on Monday due to address the UN Ocean Conference in Lisbon, co-organised by Portugal and Kenya.

Originally due to take place in April 2020, the gathering was postponed in the wake of the Covid-19 pandemic. It will run through Friday.