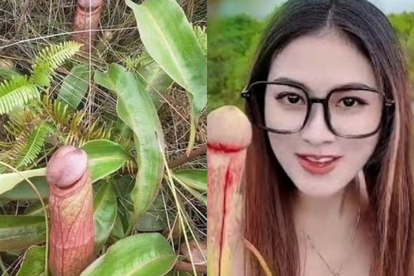 Woman have been urged to stop plucking carnivorous penis plants in Cambodia. Images via Twitter: @naalikeram

Woman have been urged to stop plucking carnivorous penis plants in Cambodia. Images via Twitter: @naalikeram

In a bit of bizarre Cambodian news, women in the country have been asked to leave an endangered ‘penis plant’ species alone. This after videos of women playing with the plant – which looks rather similar to the male reproductive organ – started going viral on TikTok and other social media applications.

Women in Cambodia have been urged to let the Nepenthes holdenii plant be after they started sharing videos of themselves getting frisky with the plant on social media.

The endangered plant- which closely resembles a penis – has become quite popular online as many women and even men go out of their way to post videos of themselves with the plant.

In a more recent clip, three Cambodian women recorded themselves playing with the plants and plucking it from hits roots while making jokes about penises.

Cambodia’s Ministry of Environment has since asked people to stop picking the plant because it may soon become extinct.

“What they are doing is wrong and do not do it again in the future! Thank you for loving natural resources, but do not pick, (or) they will be ruined,” the Ministry of Environment warned, according to an New York Post article.

The tropical pitcher plant is commonly found in the mountainous regions of western Cambodia and has been a protected species for many years now.

A once in a lifetime European bloom

In October last year, visitors to Leiden, Netherlands got to witness the plant bloom for the first time in 25 years.

One of the shrivelled plants was cut open for the visitors who remarked that even opened up it was beautiful.

Botanist have also said that this is only the third time the species has flowered in Europe.