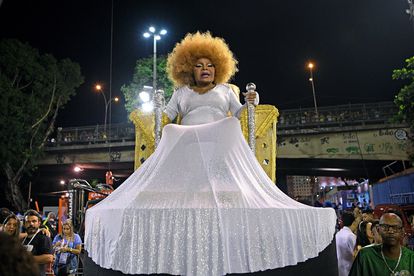 Soares’ unmistakable raspy voice made her one of the most popular and famous singers in Brazil, featuring on her more than 30 records released over the course of a six-decade career.

“It is with great sadness and regret that we inform of the death of the singer and songwriter Elza Soares, at 91 years old … at home, in Rio de Janeiro, from natural causes,” her press office said in a statement shared on Instagram.

Alongside Tina Turner, black diva Soares was named Singer of the Millennium by BBC Radio in 2000.

“An icon of Brazilian music, considered one of the best artists in the world, the singer chosen as Voice of the Millennium had a tremendous, intense life, who moved the world with her voice, her strength and her determination,” said the statement.

Scarred by numerous personal tragedies, Elza Gomes da Conceicao Soares became a symbol of resistance and courage towards the end of her life.

The daughter of a manual laborer and a laundress, she was born in Rio de Janeiro in June 1930 and brought up in the Moca Bonita favela.

Her father forced her to get married aged 12 and a year later she gave birth to her first child.

She had seven children with her first husband but the first two – born prematurely and malnourished – died young.

She would later confess to having stolen food to feed them.

She then lived for 17 years with football great Garrincha, one of the stars alongside Pele of Brazil’s World Cup triumphs in 1958 and 1962.

They had one child together, a son who died aged nine.

“The adored and eternal Elza is resting, but she will always be in the history of music and in our hearts and those of millions of fans throughout the whole world,” said the statement.

“As Elza Soares wanted it, she sang right to the end.”