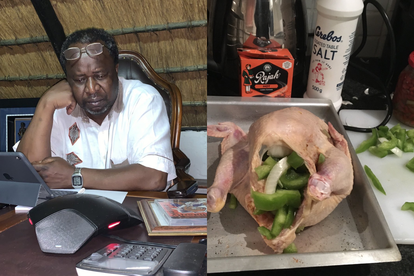 If there’s one thing about former minister Tito Mboweni, it’s that he never disappoints when it comes to dismal cooking. Not long ago, he stepped down from his position as South African finance minister. And one would think this gave him enough time to become a great chef.

But judging by his latest efforts, cooking is still not his strong point.

Tito Mboweni’s cooking skills seem to be deteriorating each time he stands in front of his now-famous stove. The former finance minister proved this after taking to his Twitter page to share a snap of his stuffed chicken.

The full chicken which was being prepared to be popped into the oven was filled with nothing other than large pieces of chopped green pepper and Onion. Talk about a lack of imagination!

To make matters worse, the only spices that went into flavouring the chicken appeared to be some Rajah masala and plain white salt.

“The famous or infamous chicken roast!” he hilariously captioned the dry looking meat.

Mzansi is not impressed

Needless to say, he received a better roasting than the chicken was about to get by social media users who as usual, criticised his poor cooking skills.

“No wonder we keep discovering new variants in Mzansi!!!”

“Do you really eat your food bro Tito or it’s just some experiment?”

“As a celebrity, I will be writing a letter to the presidency requesting that Tito Mboweni be given his job back or maybe get him a wife, we can not be subjected to this as a country we have a lot of problems.”

It’s never a dull day for Uncle Tito and his many followers make sure of that. He recently had them laughing after sharing how load shedding got in the way of his cooking.

Of course, many people were taking to the comment section of his post to crack jokes about the country’s big electricity issue.