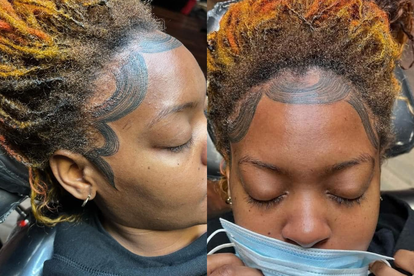 This woman took drastic measures to have edges. Images via Facebook: @celebrities

This woman took drastic measures to have edges. Images via Facebook: @celebrities

Right now, here in South Africa and even abroad, having “edges” is once again the “in” thing. Women with natural hair, weaves, braids and basically, any kinds of hairstyles and dos are using brushes to flatten the small hairs that grow on the edge of their hairline and if you haven’t guessed – they’re calling it edges.

One woman has taken her obsession with edges way too far after deciding to get some permanently tattooed on her face.

Woman decides to get “permanent edges”

If you’re haven’t seen or heard that edges are the latest craze in the world of hair then you’ve certainly been living under a rock.

Edges seemingly came back into fashion just over a year ago after it became quite forgotten and more women than ever are joining the trend this time.

While some women opt for a more subtle look, others prefer the drama. One woman definitely chose drama when she decided to get some extra large edges tattooed across her forehead.

While it probably isn’t the worst tattoo idea in the world – it isn’t exactly normal. The post of her final product was shared on Facebook by a page called @celebrities who captioned it:

“Tattoo of edges this year.”

Netizens are in disbelief

The post quickly went viral as thousands of men and women flocked to the comment section to share their thoughts. Of course, many people laughed their butts off while others warned the woman that she would soon come to hate her permanent edges.

“In the next 2 years she will start regretting this.”

“Not nice.. This lady she has a beautiful hairline there was no need for that”