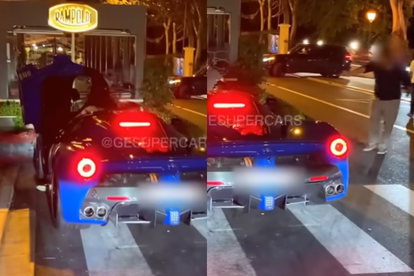 Imagine watching someone crash your $3.5 million (around R59m) Ferrari? One man does not need to imagine after his car was crashed by a valet while he watched helplessly. In a video that has since gone viral on YouTube, the valet can be seen driving the pricey car into some parked scooters while trying to park it and it’s quite tragic.

Of course, the owner has insurance but the valet will obviously need to cover whatever the excess fees may be -let’s hope this was his first accident and he still has thousands worth of tips from other drivers saved somewhere.

Usually, people with super expensive cars would never let anyone near them. A Dubai bigwig, however, appears to be a very trusting man after he handed his $3.5m, Ferrari, to a valet while on a night out.

Instead of safely parking the multi-million dollar rare collectors addition Ferarri LaFerrari, the valet ended up ramming it into some scooters in a Monaco parking lot in the streets of the luxe French Riviera state

According to 2OceansVibe, only 499 units were ever produced of the car with a starting price of over $1 million.

These expensive rides are also considered the epitome of luxury and exclusivity on the road which must be why the valet driver was so eager to get behind the wheel – something he will probably never be allowed to do again.

The video of the crash has since been shared on YouTube and shows how people were stopping to take photos of the stunning blue Ferrari when suddenly the crash happened.

The car now has several scratches on its carbon fibre front splitter and front bumper, which the owner’s insurance company might be able to fork out for fixing.

The young valet may however have to fork out some money too for excess fees.

‘Couldn’t account for one cent’: Mel Viljoen on Kiki’s charity