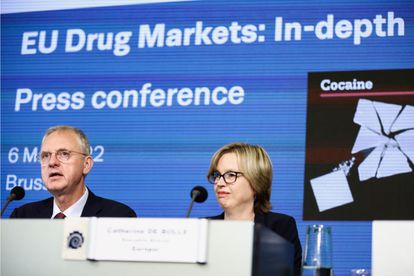 The market for cocaine and methamphetamine is on the rise in Europe, an EU report said on Friday, driven by record levels of trafficking, violence and health issues. Image: Kenzo Tribouillard / AFP

The market for cocaine and methamphetamine is on the rise in Europe, an EU report said on Friday, driven by record levels of trafficking, violence and health issues. Image: Kenzo Tribouillard / AFP

The market for cocaine and methamphetamine is on the rise in Europe, an EU report said Friday, driven by record levels of trafficking and sparking violence and health issues.

In 2020, the highest ever amount of cocaine – 214.6 tonnes – was seized in the EU, Norway and Turkey for the fourth consecutive year, according to the report by Europol and the European Monitoring Centre for Drugs and Drug Addiction (EMCDDA).

The EU faces a “growing threat from a more diverse and dynamic drug market, which relies on close collaboration between European and international criminal organisations”, the report said.

The new nature of this market has resulted in “record levels of drug availability, increased violence and corruption, and worsening health problems,” said EMCDDA director Alexis Goosdeel in a statement.

Disruptions caused by the COVID-19 pandemic did not particularly rattle markets, and cocaine trafficking by sea continued at pre-2019 levels.

The market for cocaine – the EU’s second most consumed drug after cannabis – was worth at least 10.5 billion euros (R178 billion) in 2020.

An estimated 14 million adults in the EU aged 15 to 65 have tried the drug, which is either snorted as a white powder or smoked in a form widely known as crack cocaine.

Police seized most of the cocaine in Belgium, Netherlands and Spain in 2020, the three countries where the drug is mostly transformed after being produced in Colombia, Bolivia and Peru.

Methamphetamine, the world’s most widely used synthetic stimulant drug, plays a “relatively minor role in the European drug market,” the report said, although the latest data suggests a “growing threat”.

AN UNWELCOME ADDITION TO THE EU DRUG MARKET

Production in Europe has historically taken place in small “kitchen” laboratories in Czech Republic and neighbouring countries, but is now also occurring at industrial-scale laboratories in the Netherlands and Belgium.

Crystal methamphetamine is an “unwelcome addition to the EU drug market”, the report said, and a concern in terms of health consequences including “acute toxicity, psychotic episodes, polydrug use and death.”

In Belgium, France, the Netherlands and Spain, “competition between drug suppliers has intensified, leading to an increase in violent confrontations”, murders and kidnappings.

Corruption is a key threat in the EU, the report added, noting nearly 60% of criminal networks use it as a facilitator.