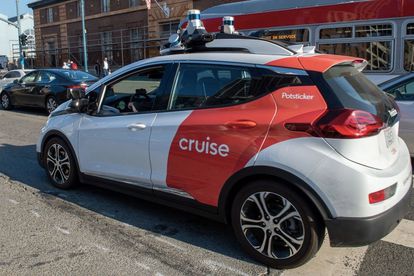 A San Francisco police officer was confused after he pulled over a driverless car. Image via Twitter @grescoe

A San Francisco police officer was confused after he pulled over a driverless car. Image via Twitter @grescoe

San Francisco police faced an unprecedented problem recently when an officer stopped a car that was driving at night with no headlights on, only to discover there was no one inside.

The vehicle, it turned out, was a self-driving car, and the police officer’s encounter was captured on film by a passerby, who posted the footage on social media.

CRUISE RESPOND TO THE PULLED OVER DRIVERLESS CAR

The clip, showing bemused officers circling the vehicle and peering through its window for several minutes, has been shared so widely that Cruise, the company that owns the vehicle, reacted on Twitter to explain what had happened.

It said the self-driving car “yielded to the police vehicle, then pulled over to the nearest safe location for the traffic stop, as intended. An officer contacted Cruise personnel and no citation was issued.”

In the footage, as the police are inspecting the parked vehicle, someone can be heard exclaiming, “There’s no one in it, it’s crazy!”

HEADLIGHTS ON CRUISE DRIVERLESS CAR TURNED OFF DUE TO ‘HUMAN ERROR’

A police spokesperson said that after the police had stopped the car, a maintenance team had taken control of it.

Cruise explained that the headlights were turned off due to human error.

Founded in 2013, Cruise has developed software that allows cars to drive themselves completely autonomously.

The US manufacturer General Motors owns the majority of shares in the company, valued at more than $30 billion (R434.1 billion) thanks to investments by giants such as Microsoft, Honda and Walmart.

Since February, Cruise has passed a key threshold in offering individuals the chance to book free trips in the streets of San Francisco in its driverless cars.

These camera-clad vehicles take passengers wherever they want, with a driver who is present but does not touch the steering wheel or the pedals.