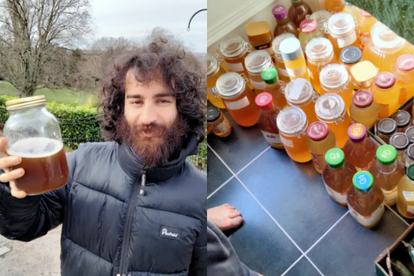 Harry drinks his own urine because it has “healing powers”. Images via Instagram: @holistichealthwithharry

Harry drinks his own urine because it has “healing powers”. Images via Instagram: @holistichealthwithharry

People do all sorts of weird and wonderful things but this UK man may just be the strangest. Harry Matadeen recently shared that he and his sister are not on good terms because bizarrely, he drinks his own urine and also rubs it all over his face. According to him, his urine has therapeutic properties that have helped him over the years.

Man drinks his own urine to ‘heal himself’

One man has made quite a shocking revelation about his drinking habits. According to Harry Matadeen, he started consuming his own urine in 2016 out of desperation to cure his mental illness.

Matadeen told Daily Mail that he drinks about 200ml of his urine every day because it leaves him feeling “peaceful, calm, and determined.”

Unfortunately for him, his weird habit has basically severed his relationship with his sister who cannot believe he picked up what many can agree is an unusual and pretty disgusting habit.

The 38-year-old however believes that drinking his urine is therapeutic and has helped him immensely. In fact, he is such a strong believer in urine’s healing powers that he has written a book about the health benefits of drinking urine.

He also refers to it as “the secret to eternal youth”.

Scientists call it a no-no

According to the Healthline article, drinking one glass of urine may not be deadly but it isn’t advised either.

“It can introduce bacteria, toxins, and medications into your system. There’s no reason to think that drinking urine would benefit your health in any way.

There are many more effective routes for getting a high dose of vitamins and minerals. Pop a few gummy vitamins — you’ll probably prefer the taste!” reads an excerpt from the article.

ALSO READ: Woman drinks her own menstrual blood because it has ‘healing powers’