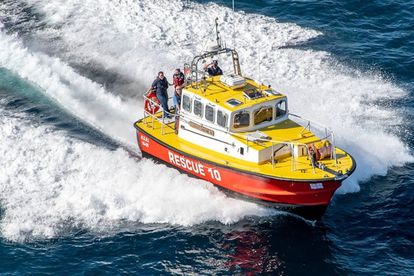 The second vessel, which was imported as “hull, deck and bulkheads”, was completed by Two Oceans Marine in Cape Town earlier this month. The innovative French-designed Offshore Rescue Craft (ORC) will take the NSRI’s crew safety and marine rescue capability to a new level.

Named in honour of the Canadian stockbroker and analyst, Donna Nicholas, the vessel was destined for service at Station 10 in Simon’s Town. Donna really admired the work done by the NSRI and always said that she wanted to support it.

That’s why she reportedly left a substantial amount of money in her will – R20 million to be exact – for the institute in order to perform their rescue operations in extreme conditions.

At 14.8m long and 4.8m wide, it can be deployed on rescue missions as far as 50 nautical miles (over 92km) from land and has an expected lifespan of at least 40 years.

It is said that an excited Simons Town rescue crew will begin training and testing the new vessel before it is officially welcomed to the NSRI’s growing fleet later this year.

“Station 10 Simons Town is buzzing with activity as we make the final preparations for the arrival of our vessel, Donna Nicholas. With any new vessel comes planning and facility alteration in order to accommodate her. The rescue base has been rebuilt and the slipway and winch gear upgraded in order to house this magnificent vessel. The upgrades are now complete, and the crew is busy adding the final touches to make it home for Donna Nicholas and crew”, said Station 10, Station Commander, Darren Zimmerman.

The new world-class search and rescue vessels will accommodate six volunteer rescuers on board, in shock mitigating seats to allow for high-speed operation in difficult sea conditions and has the ability to carry up to 23 survivors.