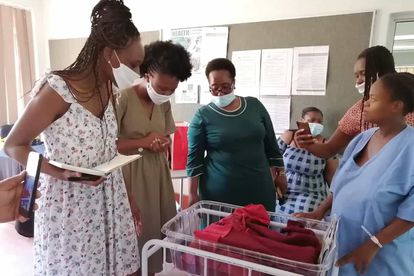 The women discovered the plight of the struggling families who had lost their incomes as self-employed rural workers. The three women donated to newborns at big hospitals in Tzaneen at a time when supplies and income are scarce for so many.

Due to the lockdown, many new mothers from poor families depending on self employment have lost their source of income.

This is what pushed three Limpopo women in to assisting vulnerable newborns mothered by the unemployed across their small rural town of Tzaneen.

Donations to the babies and mothers

The three women donated clothes, blankets and napkins to vulnerable newborns in the middle of the pandemic and lockdown at three big hospitals in Tzaneen.

The team of Samaritans included two professionals and one businesswoman from Tzaneen. They collaborated to assist mothers who found it hard to keep up with lockdown life after losing their source of income.

The women, Vutivi Makhubele, who is the Greater Tzaneen Municipality’s Communications Officer, Patience Makhubele a Quality Assurance Officer at Cook for Life and Kulani Ngobeni a food entrepreneur, donated to all women in the maternity wards at Letaba, Dr CN Phatudi and Van Velden Hospitals.

Makhubele said, “We approached the Mayoress of Greater Tzaneen and she agreed to also help sponsor the project and support us.”

Makhubele explained, “We identified the need to donate baby essentials such as blankets, nappies and clothing when we first went to the hospital to donate second hand blankets and there were not enough because most of the mothers are unemployed and their incomes are affected by the virus.”

She said they decided to ask for donations from local businesses and doctors to boost their initiative.

The women are urging residents to donate essential items to assist desperate mothers and babies who are currently struggling.

Makhubele said some situations are very disturbing and are not to be ignored.

One new mother Tintswalo Khosa (32) said together with her self-employed husband she had lost her income during lockdown when government forced all liquor outlets to shut.

“I was about seven months pregnant already when lockdown started and all clothing stores closed before we could even start buying for our unborn. The little money saved from our small rural liquor outlets was used to stock more food for our other children just like the rest of villagers who were uncertain about the opening of grocery shops during lockdown,” explained Khosa.

She said by the time she delivered, they had no money at all.

“I’m now thankful to the women who thought about some of us during this crisis,” concluded Khosa.