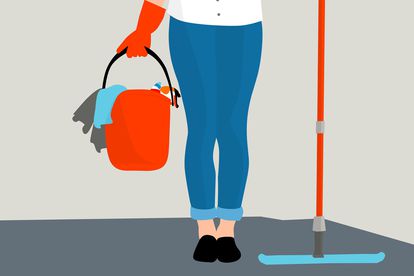 SA tweeps are divided over the daily wage of a domestic worker.
Image via Pixabay

SA tweeps are divided over the daily wage of a domestic worker.
Image via Pixabay

A Twitter user has sparked a debate on the going rate for a domestic worker’s daily wages.

But whilst some think that R200 is more than enough for cleaning a home, others have claimed the amount does not cut it.

But what does the law have to say about it?

On 1 March 2022, the Department of Employment and Labour gazetted a domestic worker minimum wage increase from R21,69 to R23.19 per hour.

Assuming a domestic worker works for a minimum of 160 hours per month – broken down into eight hours per day, 20 days per month – their monthly minimum wage would be R3,710.

For the daily rate of eight hours, this amounts to R185.52

Employers were also encouraged to register their domestic workers with the Compensation Fund against injuries on duty.

However, the department acknowledged that the new legislation was often being overlooked in the workplace. According to Business Insider, the department was conducting inspections across the country in an effort to ramp up compliance with the new minimum wage.

As a result, they found many households were “exploiting” their domestic workers

They said in a statement: “The domestic worker sector has long been identified as a problematic sector when it comes to compliance with labour laws, with workers still paid lower wages and subjected to sorts of abuse and exploitation”.

IS R200 A DAY TOO LITTLE OR JUST ENOUGH?

According to one Twitter user, R200 for a day’s wages – for a domestic worker who does not work every day – was nothing short of “unacceptable”

She tweeted: “Imagine someone cleaning the entire house and saying even R200 is fine sisi.

The woman’s tweets sparked a debate on Twitter. Some felt that R200 was too less for a domestic worker.

@Imraan85602915: “I was giving my domestic worker R400 a day and an extra R50 transport. She was provided for with a uniform and lunch and tea, daily. We need to stop exploiting our own people and then expect poverty to fall. We need to be more giving if things are to change”

Others felt it was acceptable for a domestic worker’s wages.

@nhlanhlangwaqa_: “R200×5×4= R4000 that’s starting somewhere. She can even save money and be a little entrepreneur. It all starts somewhere when you’re struggling”

@Lumukanda_: “ They say ‘if you can’t afford to pay helpers don’t get them”. So what do I tell MamKhize? That Twitter said I should pay her more and I can’t afford her because of Twitter rates? No man guys. Snap back to reality”