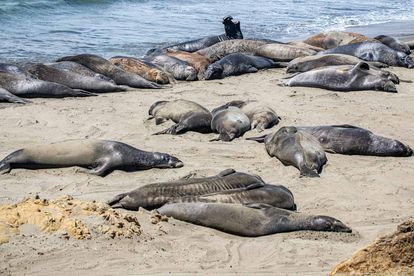 The number of corpses is alarming. Image supplied

The number of corpses is alarming. Image supplied

The Cape fur seal is an endemic species found along the West Coast of Southern Africa — from the southern tip of Angola right down to Algoa Bay in South Africa.

It is estimated that 1.7 million Cape fur seals exist in the fresh oxygen-rich waters along this coastline.

In August, conservationists recorded a number of Cape fur seal corpses on the shores of Pelican Point near Walvis Bay. This was not an unusual occurrence because every year there are similar sightings on the beaches of Pelican Point at this time.

However, Dreyer noticed a sharp increase in the number of corpses as the weeks passed.

“Towards the end of September, instead of seeing 10 dead pups a day it got up to 100,” Dreyer said.

DRONES WERE USED TO GATHER FOOTAGE

Dreyer was eager to gain insight as to why the seals were dying at an unprecedented rate. He used a drone to gather footage of the seal colonies at Pelican Point.

The footage revealed some alarming images. Dreyer calculated that approximately 5,000 seal pup foetuses were scattered along the beach at Pelican Point.

“It was really heartbreaking getting to the beach and seeing these sights. The seals are normally quite vocal, but there was a different atmosphere. You could just feel the pain and presence of death everywhere.

“The females do mourn their pups and often carry them around for four or five days afterwards; nudge them and move them around. It’s just tragic to see,” Naude Dreyer said.

The Cape fur seal is the most common marine mammal found along the coastline of South Africa and Namibia. Dreyer estimates that between 8 ,000 and 12, 000 seal pups have perished in the mass die-off.

“From one day to the next it got exponentially worse, and it just hit home, the sheer scale of this die-off,” he says.

Conservationists noted that it was not only dead seal pups that were scattered on the beaches at Pelican Point. Adult female seals were amongst the corpses. They noticed that unhealthy females were coming ashore to abort their pups on the beaches. The adult females were noticeably underweight.

“We’re seeing very thin mothers on the beach. Obviously, if these mothers are dying, they can’t give their pups enough to eat, so their pups are also dying,” Dreyer remarked.

Dr Tess Gridley from the Namibian Dolphin Project, a research and conservation programme based in Walvis Bay states that a minimal number of deaths at the seal colonies is a normal part of marine life cycles. The number of abortions and the synchronised mass die-off is alarming though.

“What’s concerning here is the high number of abortions and the synchronised timing. The impact of this die-off at the Pelican Point colony, and possibly further afield, may be felt for years to come,” Dr Gridley says.

A team of experts has been formed to investigate the cause of the die-off. Dr Simon Elwen and Dr Tess Gridley from the Namibian Dolphin Project, as well as South African veterinarian Dr Brett Gardner who conducts research into animal abortions head up the team. Dr Tess Gridley points out that a number of causative factors exist.

“The female Cape fur seals have, either through a combination of malnutrition, or perhaps a bacterial infection, a pollutant or something else, we’re not really sure, that led to a wide-scale abortion event. There can be several different factors that all work together to cause these abortions and it’s quite a complicated process to unravel it all,” Dr Gridley said.

Conservationist, Naude Dreyer is responsible for the collection of samples from sites in Namibia. He believes the peak has passed.

“Now, it’s just a matter of trying to find answers. We’re collecting samples like crazy, working with labs in South Africa and local vets, scrambling to get some results,” Dreyer said.