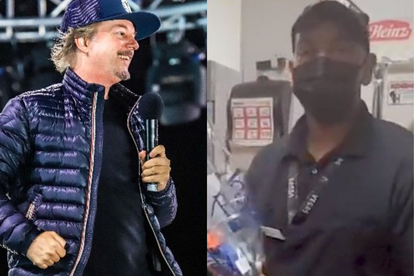 American actor David Spade just became a hero after he decided to gift the Burger King employee who went viral, $5000 (around R71k). The staff member first made headlines after a video of him reacting to the gift bag he got from the company after working for them for 27 years was shared online.

Many people slammed the company as cheap after seeing the measly gifts that they placed inside the bag for someone who had stayed loyal to them for such a long time.

While celebrating his 27 years of loyalty at Burger King Las Vegas, Kevin Ford, shared a clip of himself unbagging the gift bag he got from the company as a thank you.

Much to everyone who watched the video’s surprise, what was inside was pretty disappointing.

Inside the goodie bag were just one movie ticket, two candy boxes, a pen, and a promotional mug worth around $27 or R430.

After the video went viral and made headlines, Kevin set up a GoFundMe page and received a number of donations.

One of the donations was from ‘Rules of Engagement’ actor David Spade who made a whopping $5000 donation (roughly R71k).

According to TMZ.com, David wrote:

“Keep up the good work. 27 yrs” and Kevin responded: “Holy s**t dude!!! Cannot Believe This!!! THANK YOU SO MUCH For even Watching the Video! I Love You My Brother!!! Much Love and God Bless … I think might be able to take a Day Off …”

The actor then wrote: “Wait till year 30” and Kevin concluded by thanking him again: “Damn, Are You One Of My Managers??? Thank You Again Sir, Your the Best, Have A Great Day …”