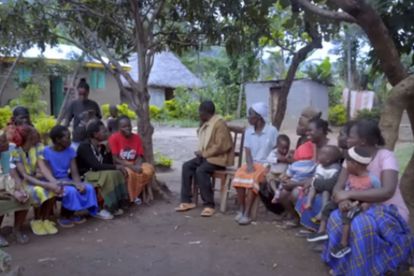 David Kaluhana, a 61-year-old Kenyan man, has 15 wives and plans to take on more partners. Image via YouTube: Afrimax English

David Kaluhana, a 61-year-old Kenyan man, has 15 wives and plans to take on more partners. Image via YouTube: Afrimax English

While South African women are still reeling from the news that the government will not allow polyandry, polygamy is a practice that is very much alive across the continent. For many years, African men have taken multiple wives but one man is taking polygamy to a whole new level. David Sakayo Kaluhana from Western Kenya has 15 wives and 107 children. As per Afrimax English, the 61-year-old lives in a small village with all his wives.

DAVID KALUHANA IS LIVING LIFE WITH HIS 15 WIVES

Speaking to Afrimax English, David Kaluhana claims he has a high IQ and says his head cannot be “managed” by just one wife. The Kenyan man also highlighted that because he is a “genius” he possesses a “bigger load” that one woman cannot carry.

“That’s why I married many wives. Because I’m too smart for one woman,” said the 61-year-old.

The 15 wives all share various duties in the small village, making life as a family easier for them.

ONE OF DAVID KALUHANA’S WIVES SHARES HER EXPERIENCE

Jessica Kaluhana married David in 1998 and had 13 children with him, two of which who have passed away. Jessica said they all live happily together and she loves David.

“I’ve never had jealousy of him bringing in new women. He’s a responsible man and whatever he does is always right as he takes enough time thinking before he acts,” said Jessica.

Rose, David’s seventh wife has had 15 children with him and says they all live together in harmony in the village.

“We are living a good life, loving each other,” said Rose.

Reality television star Musa Mseleku and former president Jacob Zuma are two of many South African men who have multiple wives. Mseleku, who was four wives, failed to take on a fifth after his other wives expressed that they were against the idea.

“The way it’s supposed to be done, is for me to engage with the first wife and tell her I intend to take a fifth wife and she would communicate with the other wives, but in the modern times – it does not work that way because all the wives have to be treated equally,” said Mseleku as per The Citizen.