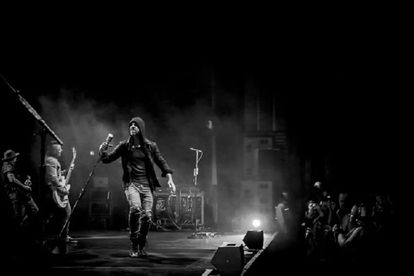 Daughtry performs on stage at Eventim Apollo on May 27, 2016 in London, England. Getty Image/Christie Goodwin / Contributor

Daughtry performs on stage at Eventim Apollo on May 27, 2016 in London, England. Getty Image/Christie Goodwin / Contributor

Daughtry is set to return to South Africa this October and will be supported by very special guest Jesse Clegg.

“As the frontman for the band bearing his name, Daughtry has become one of the most visible and consistent rock & roll torchbearers of the 21st Century. Since rising to prominence on the fifth season of American Idol, he has released four albums, all of which reached the Billboard Top Ten and have combined sales of over 8 million copies in the U.S.

“Daughtry`s self-titled debut was the best-selling album of 2007, which contained four Top Twenty hit singles including the Grammy-nominated smash “It`s Not Over.” Leave This Town also reached Number One in 2009, while 2011`s Break the Spell was certified gold. His group`s most recent record, 2013`s Baptized, featured the platinum-selling “Waiting for Superman,” which the singer points to as a turning point in his songwriting.”

Here’s what you need to know about the American Band’s return to South Africa.

When will Daughtry be performing in South Africa?

Daughtry will be returning to South Africa performing in Cape Town on 25 October 2018 at Grand Arena, GrandWest and 27 October 2018 in Pretoria at the Sun Arena at Time Square in support of their brand new album Cage to Rattle.

We are so excited to get to finally share with you our new album Cage to Rattle! It's been a long time coming, and we hope you love it as much as us. Let us know in the replies. Get it here: https://t.co/FzFag3Fc7p pic.twitter.com/Cu5O7PCsnz

Tickets for Daughtry range from R405 to R660. Tickets are currently on sale at Computicket.

Jesse Clegg is set to start off the performance at 20:00 followed by Daughtry at 21:00.

Check out our recap from Week 2 of our Cage To Rattle Tour!! We can’t wait to see you ?