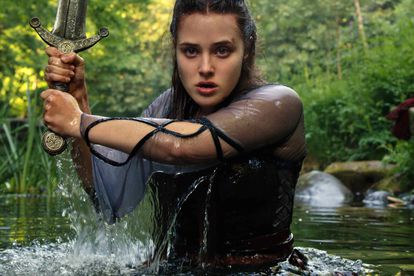 Katherine Langford as Nimue in episode 104 of Cursed on Netflix.

Katherine Langford as Nimue in episode 104 of Cursed on Netflix.

After months of waiting, Cursed landed on Netflix today. The Arthurian series stars Katherine Langford in the lead role and is based on the New York Times bestselling novel from Tom Wheeler and Frank Miller.

When Game of Thrones ended, it left a gaping hole in the hearts of fans. Some found solace when The Witcher was released, and more recently, Warrior Nun. For many others, however, the search continued.

Your search might be over. I was lucky enough to watch the first five episodes ahead of the show’s launch. In short, Cursed is a re-imagining of the tale of King Arthur, the sword we know as Excalibur, and a wizard named Merlin.

This time around, however, the tale features a strong female lead and a slightly darker storyline.

‘Cursed’ plot — What is the show all about?

You’ll be forgiven for thinking that this Arthurian tale centres around King Arthur. No. The would-be King of Camelot takes a step back.

Instead, the spotlight falls on a young warrior named Nimue, portrayed by Katherine Langford. Nimue is the woman who will go on to become the influential Lady of the Lake and turns out to be heroine we were waiting for.

It’s about time that Arthur’s legend is told from a different point of view.

A dying wish turns into a mission Nimue is determined on carrying out, and she reluctantly teams up with a mercenary named Arthur on an epic adventure to deliver a powerful sword to Merlin.

Along the way, their path crosses with friends and foes, with Fey Folk and the Shadow Lords, with light and dark forces as we learn more about the societal divides and entities known as the Hidden.

We get to see the battle of Christianity and Paganism in a different light, too. Zealots known as the Red Paladins are waging war if not all-out genocide on Fey Folk.

Will Nimue see her mission through to the end, or decide to keep the sword for herself? We also follow Merlin in a separate story strand; a side quest, if you will.

He comes across as somewhat of a drunken vagrant with barely enough magic to make it through the day. But the sword is on its way to him, and the build-up is tangible.

Is it perfect? I can’t say yet, I’ve only seen half the first season. There a few niggles, the balance between providing enough background information while also not overwhelming viewers needs some refining.

Is it worth the watch? Most definitely. I can’t wait to finish the first season and see where Nimue’s quest takes her.

With a fresh take on Arthurian mythology and superb story-telling, this re-telling gives power to the Lady of the Lake, a figure who has often been written as nothing more than a mysterious, other-worldly helper.

The new perspective is truly refreshing.

Cursed stars Katherine Langford, known primarily for her role as Hannah Baker in 13 Reasons Why. Her story is aided by Arthur, portrayed by newcomer Devon Terrell in his first lead television role. Gustaf Skarsgård portrays Merlin.