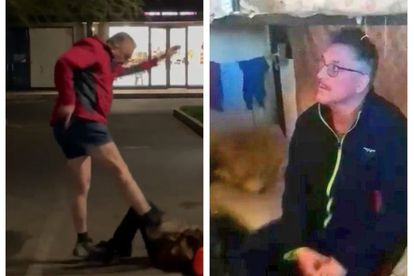 Corrie Pretorius, a Groblersdal resident, claims he was assaulted in the police holding cell.
Image via Twitter

Corrie Pretorius, a Groblersdal resident, claims he was assaulted in the police holding cell.
Image via Twitter

Corrie Pretorius – the Groblersdal man who assaulted a teenage boy over salt seasoning in a fish and chips shop last week  – is fearing for his life.

This, after the 50-year-old white male claimed he was severely beaten in police custody following the incident

Making a bail application in the Groblersdal Magistrate’s Court on Friday, Pretorious revealed that he had been assaulted whilst in the police holding cells

He also alleges he was deprived of his chronic medication for temporal lobe epilepsy and depression – since his arrest on 16 June.

Pretorius stated in an affidavit:  “Due to the nature of the charges and the allegations as covered in details by the media, my life is under threat in correctional service.

“As conveyed to the SAPS by the legal representatives, I have been severely assaulted while incarcerated and it cannot be stated that I am not faced with the distinct possibility of being assaulted again.

“I wish to indicate that I am deeply traumatised by what transpired and I am constantly faced with the threat of a life-ending attack in prison.

According to reporter Cliff Shiko, Pretorius was moved from Groblersdal police cells to the Emalahleni prison for his own safety.

NO SYMPATHY ON SOCIAL MEDIA

Following his appearance in court and news of his assault, many South Africans took to social media to share their views. And there was an overwhelming sense of no sympathy for the Groblersdal man.

@MadEarlT: “Imagine how that teenager felt…”

@MazdaTrix: “What is that saying: ‘Do unto others as you would have them done unto you’”

@BraBobM: “They haven’t moerd him enough! Send him to C-Max”

@Dunstan26520717: “I’m sorry, but this happens to everyone who goes to prison. You shouldn’t be assaulting anyone, let alone a 16-year-old child. Doesn’t matter what the circumstances are. He needs to be a lesson to others to show restraint”