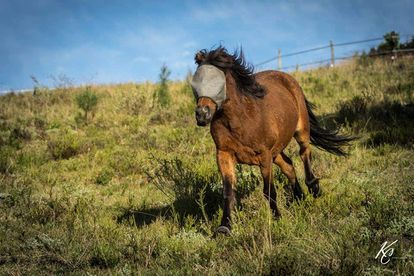 Cody, a 10-year-old pony, made international news in June last year when he found his way home 16 days after the devastating Knysna fires. Cody was part of a herd of five ponies who had been ushered across the N2 national road as a last resort when the fire encroached on their home, Essendale Farm.

“When Cody was spotted trying to cross back over the N2, 16 days after he had fled his home, onlookers mourned his coming fate.  He was emaciated and badly burnt, and had been without food or water for two weeks.  His digestive system had shut down, and the injuries to his eyes meant that he could hardly see. Cody appeared to be blind and without hope,” says Karen Rademeyer, Cody’s owner.

Against what seemed like insurmountable odds, Cody made his way home, crossing the busy N2 just 100m from the farm where he had been born.

How he stole our hearts

His story captured the hearts of many South Africans as well as people living abroad who heard his story.

“Thanks to the help and overwhelming support of many friends and strangers too, Cody has made a miraculous recovery.  He has proven to the world that anyone has the capacity to heal from their trauma, no matter how severe, provided they are brave enough to find the help they need.

Despite his scars, he is living a full life as a happy pony – a fine example to us all.  His story of bravery, inspiration and hope has touched the hearts of thousands of people throughout the world,” says Rademeyer.

As the animal ambassador for The Eden Empathy Initiative, a brand new chapter is about to unfold as Cody and his friends embark on a project aimed at achieving the impossible. He and his friends are going to be helping children and animals in disadvantaged communities through this new initiative.

The Eden Empathy Initiative, a newly formed non-profit company, combines an exciting new mix of animal-related education, skills training, activities and therapy. Their focus is on pre-teen children living in disadvantaged communities. The team will be working with young children, teaching them about wild and domestic animals in novel ways. They will also be helping them develop authentic leadership skills while removing the emotional blocks to feeling empathy, through proven, animal-assisted clinical therapy.

According to Karen Rademeyer, founder of The Eden Empathy Initiative: “Empathy is not a choice – it is an ability – and one that is easily lost when we shut down certain emotions that have become too painful to bear.  This inability to feel or care is how the abused often goes on to become the abuser (of humans and animals), and this is exactly what The Eden Empathy Initiative aims to prevent, through early intervention.”

Rademeyer says the Initiative is likely to make a significant impact – not only in terms of helping the children and animals directly involved in the programme, but also by creating an awareness of why such a dire lack of empathy exists in South Africa, how this affects all South Africans, and how we can work together to create kinder, more caring communities.

“We are very excited by the international interest and support from clinical and humane education specialists in their field,” says Rademeyer. “We also have the support of the local department of education, who immediately saw the value in our programme.  I have a phenomenal team at my side and we can’t wait to get started!”

A campaign has been created on the donation-based crowdfunding platform, BackaBuddy, to help The Eden Empathy Initiative with its programme development and set-up costs. To assist, please visit the link.